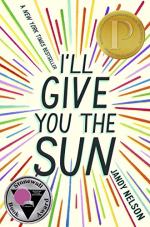 I'll Give You the Sun Summary & Study Guide

Jandy Nelson
This Study Guide consists of approximately 39 pages of chapter summaries, quotes, character analysis, themes, and more - everything you need to sharpen your knowledge of I'll Give You the Sun.

I'll Give You the Sun Summary & Study Guide Description

I'll Give You the Sun Summary & Study Guide includes comprehensive information and analysis to help you understand the book. This study guide contains the following sections:

This detailed literature summary also contains Quotes and a Free Quiz on I'll Give You the Sun by Jandy Nelson.

“I’ll Give You the Sun” is a young adult coming-of-age novel by Jandy Nelson, which follows the lives of non-identical twins Noah and Jude Sweetwine at the ages of 13, 14, and 16. Noah and Jude live on the California coast in the town of Lost Cove with their parents, Benjamin, a conservative science professor, and Dianna, a liberal art professor. The twins grow up in a stable home environment where they are instructed in both reason and emotion, knowledge and art. Both Noah and Jude are intelligent, and well-adept in art. Their mother insists they both apply to a private high school, the California School of the Arts. Noah and Jude get along very well together, and do everything together, until they are 13.

When they turn 13, differences between them become apparent. Noah positions himself as the better artist of the siblings (and as his mother’s favorite), the more rational of the siblings, and is secretly gay. To prepare for acceptance into CSA, Noah spends his summer sketching nudes through the school’s windows, where he meets an English model named Oscar. Jude, herself far more emotional and feeling, falls in with a popular crowd of girls who are more interested in makeup and skimpy clothing than anything else. Things are further complicated by the appearance of a new kid, Brian, whom Noah quickly develops a crush on, though they keep their feelings for each other quiet. Brian and Noah both pretend to be straight, and later have a falling out when Noah cannot accept Brian’s charade.

The sky comes crashing down for both Noah and Jude when they learn their mother is having an affair, and she intends to leave their father. When they are 14, their mother prepares to serve Benjamin with divorce papers, only to lose control of her car after a rainstorm, and plummet to her death off a cliff. Both twins reel from the loss. Noah lies and tells his father and sister that Dianna was actually on the way to make things right with Benjamin when she died. Jude, long feeling invisible compared to Noah, only mails her application to CSA when her father requests she mail both hers, and her brother’s.

When they are 16, Noah is attending the local public high school while Jude attends CSA. She cannot get her sculptures right, and so is sent out to mentor with famed sculptor Guillermo Garcia. Guillermo himself is reeling from heartache. He also mentors to 19-year-old Oscar, whom is heartbroken years after the death of his own mother. Oscar and Jude take an instant liking to one another, and Jude later learns that Guillermo is the one who was having an affair with her mother, something for which she forgives him.

Meanwhile, Noah has been making dangerous dives from the rocky coastal cliffs near Lost Cove, believing that his mother’s ghost guides him down into the ocean to safety. While attempting one such jump while drunk, it is Oscar who saves Noah. Oscar and Jude soon after become an item. As the novel ends, both twins confess the truth to each other – about their mother and CSA – and reconnect. Noah, Jude, and their father decide to sell their house and live on a houseboat. Noah comes out as gay, and begins officially dating Brian – something acknowledged and accepted by Benjamin.

NOTE: Due to the structure of this novel (irregular, elongated chapters), this study guide divides the novel into sections by page numbers. Quotes listed in the “Quotes” section of the guide refer to both section number and page number as a result. This study guide specifically refers to the Dial Books/Penguin Group 2014 Hardcover Edition of “I’ll Give You the Sun” by Jandy Nelson.

More summaries and resources for teaching or studying I'll Give You the Sun.

I'll Give You the Sun from BookRags. (c)2022 BookRags, Inc. All rights reserved.