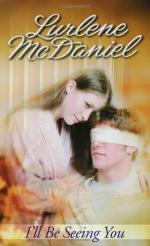 Lurlene McDaniel
This Study Guide consists of approximately 30 pages of chapter summaries, quotes, character analysis, themes, and more - everything you need to sharpen your knowledge of I'll Be Seeing You.

I'll Be Seeing You Summary & Study Guide includes comprehensive information and analysis to help you understand the book. This study guide contains the following sections:

This detailed literature summary also contains Topics for Discussion on I'll Be Seeing You by Lurlene McDaniel.

Carley Mattea is in the hospital recovering from a broken leg when she meets a young boy named Kyle Westin. Kyle is unable to see, a condition he hopes is temporary as the result of an experiment gone wrong. Kyle and his friends were attempting to make rocket fuel when an explosion caused burns to Kyle's chest and damage to his eyes. On Kyle's first night in the hospital, he and Carley become friends. Carley spends a great deal of energy boosting Kyle's spirits as he battles depression over his situation. At one point, Kyle accuses of Carley of not understanding the seriousness of his situation because she is only dealing with a broken leg. What Kyle doesn't know is that Carley is not a stranger to hospitals and that she is actually a cancer survivor.

Carley was twelve when she was diagnosed with a tumor. She underwent serious surgeries to remove the tumor and that operation was successful though it left Carley with a serious facial deformity. One side of her face is severely disproportionate and Carley is tormented seriously by others. She tends to avoid strangers and recalls instances in which children were horrified by her appearance. Because of this, Carley has never had a lasting friendship or a boyfriend. As the friendship between Kyle and Carley deepens, Carley enjoys Kyle's attention so much that she makes the decision not to tell him about her deformity. As Kyle regains his sight, she vows never to see him again, thereby eliminating the possibility that he might reject her because of her appearance.Toward that end, she leads Kyle to believe he's seeing her when he's actually looking at her sister, Janelle.

Carley has been told there's nothing that can be done to reconstruct her face but her mother makes appointments with plastic surgeons again and they hope for someone with new technology that will make it possible. They find such a doctor and he shows them, with computer software, what Carley's face can look like. Carley's hopeful but disappointed when she discovers the process will take more than a year. She believes this eliminates any chance she has with Kyle.

However, Kyle has seen Carley's inner beauty and he wants to get to know her better. When he shows up at the book store where Carley works, Carley's sister points her out so that Kyle is face-to-face with the real Carley. He is furious that she kept the secret, saying she never gave him a chance to accept her as she is. Carley is at school one day when students begin talking about a plane buzzing the parking lot. Carley joins other students outside and discovers it's the plane that belongs to Kyle's uncle dragging a banner indicating he's anxious to see her again despite their rocky start.

More summaries and resources for teaching or studying I'll Be Seeing You.

I'll Be Seeing You from BookRags. (c)2022 BookRags, Inc. All rights reserved.