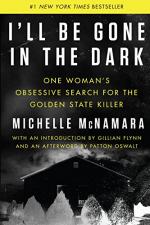 I'll Be Gone in the Dark Summary & Study Guide

I'll Be Gone in the Dark Summary & Study Guide Description

I'll Be Gone in the Dark Summary & Study Guide includes comprehensive information and analysis to help you understand the book. This study guide contains the following sections:

This detailed literature summary also contains Topics for Discussion on I'll Be Gone in the Dark by Michelle McNamara.

The following version of this book was used to create this study guide: McNamara, Michelle. I'll Be Gone in the Dark. HarperCollins Publishers, 2018.

Michelle McNamara writes the true crime account of the serial burglar, rapist, and murderer she dubs the Golden State Killer. The Golden State Killer was prolific between 1974 and 1986 in Sacramento, Orange County, Contra Costa County, and adjacent towns. McNamara collects witness descriptions from case files, interviews with detectives, and other evidence to compile a profile of the killer. She also narrates the lives of victims before and after the attack transformed their life or the life of their surviving family. Through her interviews with detectives, McNamara details the investigative processes that have been used to develop theories about the identity and location of the killer, along with the questions that are still left unanswered. McNamara passes away before she is able to finish the book, so her friends and colleagues Paul Haynes and Billy Jensen write the third section of the book, based off her notes on the case.

The first chapters explore the deaths of Manuela Witthuhn and Patty Harrington in Irvine, which happen between 1980 and 1981. Criminalist Jim White of the Orange County Sheriff's Department notices that there are uncanny similarities in both cases, mainly that the victims were stalked, bound by ligatures, raped, and bludgeoned to death. The killer had also removed an object of personal value from their homes, and taken the murder weapon with him. Together with Mary Hong, a criminologist from the same department, and Larry Pool, a sex-crimes detective in Orange County, they discover a link between the two murders through DNA evidence. The same killer had also killed a teenager, Janelle Cruz, a troubled teenager who also lived in Irvine.

During 1976-1977, the East Area Rapist terrorizes Sacramento, with nine attacks in a six month period. Although he starts by raping women while they are alone in their homes, he goes on to surprise couples while they are asleep and forcing them into ligatures. He also moves on to double murder; bludgeoning is his preferred method. He always wears a mask, usually a ski mask. His signature is to take personal items like cuff links, engraved jewelry, wall clocks, or other items. Victims notice that he is totally unhurried, that he barks directions at his victims, that he turns off vents in order to hear better, and places a sheet over television sets to control the lighting. Some believe that he may have had military or other forms of special training to possess maximum control over his environment. Detective Richard Shelby and Carol Daly are assigned the case. Richard Shelby receives a call from Visalia P.D., suggesting that the Visalia Ransacker, who was active between 1974-75, may share some similarities with the EAR. The Ransacker is described as a baby-faced man who entered homes, sometimes twice a night, ransacked them, and only took items of personal value.

In Goleta in 1979, the murders of Dr. Robert Offerman, an osteopathic surgeon, and his wife Alexandria Manning follow a very similar pattern. The killer also attempts to bind another couple in Goleta, but they break free from the ligatures and escape. They are able to provide a physical description of the home invader. He is a 5'9'' man between the ages of 25-35, with shoulder length blonde hair. The rapist is thwarted three times in Goleta. In 2000, Orange County's Larry Pool has an interest in cold cases and notices the similarities between the Goleta attacks near Santa Barbara, and those in Irvine. In 1997, Paul Holes, a criminalist from Contra Costa County, creates a profile of the killer. He notices that the killer resurfaced in the East Bay after killing in Southern California. Holes and Mary Hong find matches of the killer's DNA in Contra Costa County attacks, and in 2001, the East Area Rapist from Sacramento and the Original Night Stalker are from the East Bay are connected, and the media is informed.

In 2012, McNamara meets with amateur sleuths and detectives to collect possible theories regarding the identity and location of the Golden State Killer (also referred to as the EAR-ONS or East Area Rapist-Original Night Stalker). She meets with the Social Worker and the Kid, who are part of an Internet group devoted to collecting and publishing evidence and formulating new theories about the EAR-ONS. McNamara describes how her obsession for finding out the identity of serial killers developed when she was a teenager, and has consumed several aspects of her life. She finds some pleasure in meeting others like her who share her obsession. McNamara also meets with Richard Shelby in Sacramento, who talks to her about how Sacramento's neighborhoods were on high alert, and modified landscapes in order to limit hiding places for the killer. She meets with Larry Pool in Orange County, who speaks to her about the importance of eliminating suspects by using DNA evidence, and later with Paul Holes in Contra Costa County, who takes her on a tour of places where the Golden State Killer struck in Northern California.

Paul Holes takes McNamara to Danville, Walnut Creek, and Davis. He points out possible places of entry and escape that the killer may have taken. During the investigation of Danville's attacks, bloodhounds were used that followed the killer’s scent to the train tracks nearby, where he might have entered his car and made his getaway. Detectives had found pieces of evidence, including a ski cap, purple yarn, and fragments of paper with maps and writing on them. Neighborhoods in Walnut Creek and Davis share a similar architectural and design model, which allowed for maximum privacy and seclusion from neighbor's eyes. Paul Holes uses geographic profiling to hone in on the killer's possible buffer zones near his place of dwelling, and catalogues the towns where he attacked most frequently. He also develops theories concerning his long commute from Sacramento, where Holes believes the killer lived, and Contra Costa County where he may have worked. McNamara theorizes that the Golden State Killer may have been originally from Goleta, where he may have gotten his first practice runs, and perhaps lived in Sacramento. She also theorizes that he may have had a military background and gone to California State University in Sacramento, since his murders followed an academic schedule.

After McNamara dies in 2016, her lead researcher Paul Haynes, also known as the Kid, and investigative journalist Billy Jensen, compile her notes and write Part Three. They write about McNamara's numerous files, geographic profiling maps, and theories about the location and identity of the killer. In an Afterword, McNamara's husband Patton Oswalt writes about her passion for investigation and detective work, particularly her desire to uncover the true identity of serial killers. In the Epilogue, McNamara writes a letter to the Golden State Killer, threatening that he will soon be found and he will have to walk into the light. Throughout the book, McNamara writes about the origins of her obsession with serial killers and her loved ones have come to know and define her by her interest in detective work. Her hunt for the identity of the Golden State Killer is narrativized alongside her description of case studies, witness accounts, and detective's theories and profiles of the Golden State Killer.