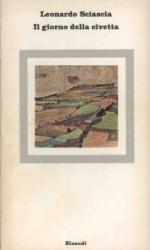 Leonardo Sciascia
This Study Guide consists of approximately 26 pages of chapter summaries, quotes, character analysis, themes, and more - everything you need to sharpen your knowledge of Il Giorno Della Civetta.

Early one morning, a man is shot dead while trying to catch a bus in Sicily. The murder investigation points to the mafia, but no one wants to admit it, for fear of what the mafia will do. In fact, most of the local people say that the mafia is a myth.

One morning, a man named Colasberna, a bricklayer, is murdered in front of multiple witnesses, but no one wants to talk to the police. By a coincidence, a man named Nicolosi happens to see Diego Marchica running away from the scene of the crime, and Nicolosi also disappears. The local informer, Dibella, known as the Little Priest, comes forward, and implicates someone named Pizzuco. Soon the Little Priest is also murdered, but first he gives the police the name of Don Mariano Arena. Don Arena is a very prominent citizen, and is rumored to be a mafia boss, although most people in Sicily will not even admit that the mafia exists.

Police Captain Bellodi is in charge of the investigation, and he brings in Marchica, Pizzuco, and Don Arena. Marchica confesses to the murder of Colasberna, commissioned by Pizzuco, and blames Pizzuco for killing Nicolosi. Pizzuco also confesses, blaming Marchica. With the information from Pizzuco, Bellodi is able to find Nicolosi's body. Bellodi thinks that the reason Colasberna was murdered is because he was the only local building contractor who would not accept the protection of the mafia.

The public is in an uproar over the arrest of Don Arena. He is closely (although secretly) connected with two very powerful government officials, Honourable Member Livigni, who is in Parliament, and Minister Mancuso. When these men hear that Don Arena is in trouble, they decide to do what is necessary to come to his aid, knowing that if he goes down, they will probably go with him. Although Don Arena does not confess to anything, Bellodi definitely has evidence against him, and hopes to use this to stop the stranglehold that the mafia has on Sicily. During the interrogation, Bellodi and Don Arena develop a sort of respect for one another, though this does not mean that they are allies.

Unfortunately, Don Arena's mafia connections furnish an alibi for Marchica, and all charges are dropped. Nicolosi's widow and her lover are blamed for Nicolosi's murder. In mainland Italy, most people think that Sicily is terribly romantic, and find the mafia to be fascinating. Even though he is frustrated with the corrupt system which rules Sicily, Bellodi decides that he still wants to work for justice in Sicily.