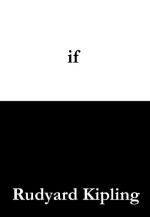 Children's Literature of the Late Nineteenth and Early Twentieth Centuries

"If" was first published as part of a collection of stories for children, Rewards and Fairies. Literature written specifically for children is a relatively new phenomenon, having evolved as recently as the early nineteenth century. Kipling was well-known for his children's works, many of which featured fantasy worlds and talking animals designed to appeal especially to a child's imagination, as many other contemporary children's works did. However, the main aim of literature for children was not simply entertainment but also education in the morals and manners of society. Rewards and Fairies is interspersed with poems that distill lessons from its various stories. "If," in its didactic format, is one such poem, offering instruction on the virtues and characteristics of a model public figure.

Women in the Late Nineteenth and Early Twentieth Centuries

As evidenced in its last line...