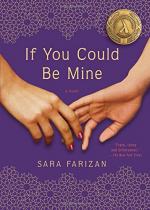 If You Could Be Mine Summary & Study Guide

Sara Farizan
This Study Guide consists of approximately 46 pages of chapter summaries, quotes, character analysis, themes, and more - everything you need to sharpen your knowledge of If You Could Be Mine.

If You Could Be Mine Summary & Study Guide Description

If You Could Be Mine Summary & Study Guide includes comprehensive information and analysis to help you understand the book. This study guide contains the following sections:

This detailed literature summary also contains Quotes and a Free Quiz on If You Could Be Mine by Sara Farizan.

This study guide is based on the following version of this book: Farizan, Sara. If You Could Be Mine. New York: Workman Publishing, 2013.

Sahar and Nasrin have loved each other since they were little girls. As they got older, that love deepened into a sexual relationship as well. They are forbidden from being in a relationship in public, though. Homosexuality is punishable by death in Iran. So, they have to sneak in intimacy and private conversations whenever they can. Sahar, who is a bookish wallflower, wants to go to a university and become a doctor. Nasrin Mehdi, who flaunts her beauty, wants to become an entertainer in Bollywood.

Sahar and her father are invited to a party at the Mehdis, without realizing it is an engagement party. A young man named Reza has courted Nasrin over the last month or so, and has proposed. The Mehdis decide that his family has enough money that he would be able to provide a good future for their daughter, so they agreed to his proposal. Ever the actress, Nasrin is able to keep her family and Reza from realizing how upset she is. Sahar is not as good of an actress, and her anger and sadness shows. She is able to pass it off as being sad that she will not see her best friend as much any more.

The one person who sees through Sahar's charade is her cousin Ali. He is a few years older than her, and is well known in the area's gay community. He realizes that the two of them have a relationship. To get her out of her doldrums, he invites her to a party at his home. The party is wild, and Sahar is not comfortable there. She meets a transgender woman named Parveen, a big, burly police officer who acts as security, and a pimp/prostitute pair nicknamed Mother and Daughter. She leaves the party early, but forges a friendship with Parveen.

After the party, she asks Parveen how to go about having a gender reassignment surgery. She lies, saying that she feels uncomfortable in her own skin. The truth is that she does not want to be a woman because life would be a lot easier if she were a man. Ultimately, she would rather society change than her.

When walking with Nasrin, they are stopped by the police. Nasrin is wearing clothes that reveal her elbows. One of the officers throws the girls into the back of the police car. They could get imprisoned, beaten, and raped without anyone caring about their safety. Nasrin is terrified, but Sahar is a little more calm. She recognizes the officer as Farshad, the bouncer from Ali's party. Farshad lets them out in an alley, and tells them to go to Restaurant Javan. He will send Ali to meet them.

Parveen takes Sahar to a support group for people in various stages of transitioning between genders. She does not fit in here, either. She is trying to figure out how to have the government pay for a gender reassignment surgery for her. That way, she figures, she can be with Nasrin.

The events leading up to the wedding continue, without Sahar getting anywhere closer to her plan. Excruciatingly painful and awkward things happen as she gets more desperate. She gets caught trying on her father's clothes. She has to go dress shopping with Nasrin. It is during this outing that Nasrin's mother, Mrs. Mehdi, warns Sahar that she should not feel jealous of Nasrin, and hints that best friends should stick together through even bad marriages. The girls also suffer through a Mehdi family party, where they try to get some incriminating information on Reza. They fail at this, too.

Sahar goes to a support group for people who have had a gender reassignment. People who have gone through it want to make sure this is something she really wants to do, because it can be pretty traumatic. Eventually, Parveen makes an appointment for her with the doctor who performed her surgery.

Several people try to dissuade Sahar from going through with the surgery. Ali says that it will not matter because Nasrin is not attracted to men. In the support group people say how disorienting and painful the surgery can be, and some doubt that she is doing it for the right reason. She does not discuss this with Nasrin, really. She talks generally about it, but has not said how committed she is to the idea.

At the surgery center, the doctor’s intern is none other than Reza, Nasrin’s fiancé. When he recognizes her, this finally ends her dream of having the surgery to save her relationship with Nasrin.

As Sahar weeps about the loss of her dream, Mother and Daughter bring Ali to the house. He has been badly beaten. Farshad, the police officer who doubles as Ali’s doorman, beat him up. Farshad wanted Parveen, and Ali forbid it. After this, Ali’s little empire crumbles down around him. He cannot be seen any more. He is not safe. He must leave the country. He invites Sahar to come with him. Instead, Sahar convinces him to take Daughter.

Sahar and Nasrin have their final “date,” going on a sight-seeing trip. They are able to spend some time together in private, but they are saying goodbye.

On the day of the wedding, Mrs. Mehdi reveals that she knows that Sahar and Nasrin are a couple. She put this wedding together to protect her daughter. She needs someone to take care of her, she says. Also, if Mrs. Mehdi could see that she is a lesbian, maybe others could as well, and that would put her life in danger. So, she granted Reza her daughter’s hand in marriage, knowing that her daughter would grow old in a loveless marriage, but at least she would grow old.

Six months later, Sahar is attending university classes. Reza, in a panic, tracks her down and says she needs to come to his house. Nasrin has locked herself in a room and is bawling. He can not reach her. Only Sahar can.

More summaries and resources for teaching or studying If You Could Be Mine.

If You Could Be Mine from BookRags. (c)2022 BookRags, Inc. All rights reserved.