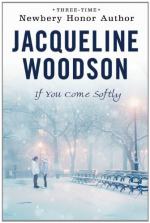 Woodson, Jacqueline
This Study Guide consists of approximately 45 pages of chapter summaries, quotes, character analysis, themes, and more - everything you need to sharpen your knowledge of If You Come Softly.

If You Come Softly Summary & Study Guide includes comprehensive information and analysis to help you understand the book. This study guide contains the following sections:

This detailed literature summary also contains Quotes and a Free Quiz on If You Come Softly by Woodson, Jacqueline.

The following version of this book was used to create the guide: Woodson, Jacqueline. If You Come Softly. Puffin Books, 1998.

In If You Come Softly, 15-year-old Elisha Eisen, known as Ellie, meets 15-year-old Jeremiah Roselind, known as Miah, on their first day of sophomore year at Percy Academy. When the two run into one another in the hall, Jeremiah knocks Ellie's books out of her hands. While helping her collect her things, the two share an unexpected connection. They are each surprised by how deeply they feel for each other right away, because Ellie is white and Jeremiah is black. Though their attraction is unexpected, the teenagers each see something kind, accepting, and familiar in the other.

Having both just transferred to Percy, Ellie and Jeremiah experience similar feelings of dislocation throughout the novel. Jeremiah is an only child whose famous parents divorced when he was young. He lives primarily with his novelist mother in Brooklyn, but also spends time with his filmmaker father who lives across the street. When he first begins attending Percy, Jeremiah feels self conscious about his parents' fame, and therefore decides to withhold their identity from his peers. He sees his new school as an opportunity to be himself outside the shadow of his parents lives and mistakes.

Though Ellie does not feel out of place at Percy because of her race, she does feel alienated from her new peers because of socio-economic differences. Though her father is a doctor, many of her fellow students go to Percy on scholarship. All of Ellie's older siblings, however, have gone to public school, and Ellie is the first to have the opportunity to attend a prep school.

She and Jeremiah connect because of their similar feelings of isolation at school, and the loneliness they also experience at home. As an only child, Jeremiah lives in a large house with his often distant mother. Ellie's father is rarely home because of his time consuming job at the hospital, leaving Ellie often home alone with her mother. After Ellie's mother abandons the family on two occasions, Ellie loses trust in her, constantly fearing her mother will leave again without notice. Though she has three siblings, they are all significantly older than her and live outside of New York. Ellie's closest relationship is with her sister Anne who lives in California. Their relationship cracks when Ellie tells Anne she is in love with a black boy. Because of Anne's response, Ellie fears her parents will also condemn her growing closeness with Miah.

As the novel progresses, Ellie and Miah spend increasing amounts of time with each other, both in and out of school. After sharing a book in history class, the teenagers start passing their afternoons together in Central Park. Though they are in love with another, classmates and strangers alike continue to judge their relationship. Girls in school whisper and giggle whenever they pass. Old white women in the park give them suspicious looks, even asking if Ellie is okay. They both know these responses are because they are in an interracial relationship.

Though Miah's mother is surprised that Ellie is white, she welcomes her son's new girlfriend into her home with kindness and hospitality. Ellie and Miah spend many months hanging out and doing homework together at Miah's house, until Miah finally asks when Ellie will introduce him to her family. Ellie admits her fears about their response, and they commiserate about similarly complicated feelings regarding race, acceptance, and love in spite of familial and social differences.

One evening after Miah walks Ellie home, Ellie gives Miah her necklace and promises she will tell her parents about him that night. Overwhelmed by his feelings for Ellie, Miah runs through the park, unaware of the world around him. Forgetting his father's warning to never run in a white neighborhood lest someone mistakenly suspect him of evil intent, Miah races through the snow, not heeding a policeman's call to stop running. Because Miah does not obey the cop's instructions, he shoots and kills Miah, believing he is the young black man for whom they are searching.

The final chapters of the novel depict Ellie at Miah's funeral amidst all of his family and friends, and later, several years after Miah's death. Though their relationship was brief and ultimately abbreviated, Ellie continues to carry Miah in her heart.

More summaries and resources for teaching or studying If You Come Softly.

If You Come Softly from BookRags. (c)2022 BookRags, Inc. All rights reserved.