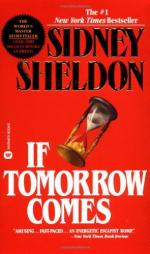 Sidney Sheldon
This Study Guide consists of approximately 31 pages of chapter summaries, quotes, character analysis, themes, and more - everything you need to sharpen your knowledge of If Tomorrow Comes.

This detailed literature summary also contains Topics for Discussion on If Tomorrow Comes by Sidney Sheldon.

This is a high-octane, sexy thriller that keeps the reader on tip-toe throughout, trying to guess what the next plot twist will be. It is the story of an average American woman, Tracy Whitney, who sets out to avenge her mother's suicide resulting from the loss of her business to con men and criminals in New Orleans. Against seemingly impossible odds, Tracy outwits these career criminals and one by one leads them to their own destruction through clever con games of her own. Her anger sated by these acts of revenge, Tracy is drawn subtly into another world of criminality peopled by hustlers, flim-flam artists, burglars and assorted other human parasites. She finds that she has a real gift for this line of work, and soon becomes one of the most wanted female criminals in the world—a one-woman crime wave who never does physical violence to anyone but who lives by outsmarting those who would capture or co-opt her. Tracy's satisfaction in executing high-risk, high-reward schemes grows exponentially until it is the central driving force, or addiction, of her life. Her relationships with men are largely superficial one-nighters; it seems she is incapable of truly loving anyone but herself.

Her first blunder, committed in exacting revenge on the crooks in New Orleans who drove her mother to suicide, lands her in a Louisiana prison. She goes to the Big Easy to find Joseph Romano, a known underworld mobster who bought her mother's company for a pittance, stole all its resources and drove her into bankruptcy. She goes to his house during Mardi Gras and charms her way inside. She then pulls a pistol and demands that he write a letter confessing his crimes. Romano pushes her down on the floor and tries to rape her. In the scuffle, the gun discharges and puts a bullet into Romano. Tracy flees to the airport, leaving Romano gasping in a pool of blood on the floor. She is arrested at the airport by a couple of plain clothed officers and taken to jail. Soon, she is incarcerated in prison where she becomes the object of desire and competition among prison bull dykes. While in prison, she adds four more names to her revenge list in addition to Joe Romano, who survives the shooting.

Pregnant, Tracy tries to reach her fiancée, Charles Stanhope, in Philadelphia by phone. When she finally gets him on the line, he shuns her because of the press coverage of her shooting, without listening to her explanation of circumstances. He also tells her she is on her own with their child and hangs up. Subsequently, Tracy miscarries their child while in prison. She is visited in prison by Daniel Cooper, an adjustor for the insurance company that insured a painting belonging to Romano——a painting that was stolen around the time of the shooting. Tracy has been charged also with theft, but Cooper's report says he believes her to be innocent of the art theft. They form a relationship that is partly romantic, partly collaborative and finally competitive in the field of high-stakes swindles.

As a prisoner, Tracy is impeccable to the extent that she is invited as a trusty to work as day nanny for the warden's daughter, Amy. She returns each night to her prison cell, but soon she hatches an escape plan. One afternoon, while watching Amy play near a lake, Tracy sees the child fall from a wall into the water. Panic-stricken, Tracy takes off at full sprint speed and dives into the lake to save her. She remembers as the cold waters cover her head that she can't swim either. Impressed with her heroism, the governor of Louisiana gives her a full pardon and releases her from prison just before the bull dykes can accost her.

Tracy goes to live at the home of a black former cellmate, Ernestine Littlechap. One by one, Tracy devises schemes for her list of five to cause their own downfalls by their particular character defects. Together they gleefully check the names off the list when these enemies have died. Unable to find a job as a computer expert because of her arrest record, Tracy steals valuable jewelry from the wealthy, executes complex financial scams, rigs games of chance and becomes a protean impersonator with a plethora of wigs, dresses, accents and improvised biographical details. The stakes get higher with each heist, and vastly more complex. She learns how to betray an associate without batting an eye. Divorced from Stanhope, Tracy dallies again with Cooper until they both surrender to love, and by the end of the story they have both renounced their lives of crime and have become engaged.

More summaries and resources for teaching or studying If Tomorrow Comes.