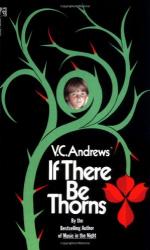 If There Be Thorns Summary & Study Guide

Virginia C. Andrews
This Study Guide consists of approximately 31 pages of chapter summaries, quotes, character analysis, themes, and more - everything you need to sharpen your knowledge of If There Be Thorns.

If There Be Thorns Summary & Study Guide Description

If There Be Thorns Summary & Study Guide includes comprehensive information and analysis to help you understand the book. This study guide contains the following sections:

This detailed literature summary also contains Topics for Discussion and a Free Quiz on If There Be Thorns by Virginia C. Andrews.

Jory begins the story by saying what he knows as fact that his mother has been married three times, that his father is Julian Marquet, that his half-brother Bart's father is Dr. Paul Sheffield, and that his mother's current husband is Chris. Jory's grandmother is known in the ballet world as Madame Marisha and Jory and his family visit her each summer. Jory arrives at home after school to find Emma, the family's cook and friend, in the kitchen. Emma says that she is constantly "anticipating" what Bart might next find to spill or drop and that she's thankful that Bart and Jory spend so much time "on that wall."

It's while the boys are sitting on that wall one day that they see workers arrive to begin restoring the old mansion next door. They are disappointed because they've spent time in the old building but hope for playmates. Instead, they see an old woman dressed completely in black, her face covered by a veil. Bart soon goes over for a visit, saying that the old woman had shouted an invitation over the wall. She asks that he call her grandmother and he comes to agree, though wavers between believing her story that she is truly his grandmother and refusing to believe.

The woman is eventually revealed as Corrine Winslow, and she really is Bart's grandmother. As it turns out, her appearance and the arrival of Jory's grandmother results in the revelation of a family secret: that Cathy and Chris are brother and sister and that Corrine is the mother of both. It's also revealed that Corrine had been married to a man named Bartholomew Winslow and that Bart's mother, Cathy, had seduced Winslow - Bart's biological father. Bart, confronted with all this information, struggles to retain a grip on reality and that grip soon wavers as he is tutored by John Amos Jackson, Corrine's butler. John Amos had been loyal to Corrine's father, fully expecting to inherit the family's fortunes. Now he is bitter and, though married to Corrine, remains little more than a servant. John Amos gives Bart Malcolm's journal and teaches him Malcolm's philosophies about life, the road to success and how to become rich and powerful. Bart picks up on Malcolm's harsh and malicious outlook and the line between the personalities soon dims that that Bart isn't always certain of his own identity.

The story comes to a head when Cathy and Corrine go missing. As Chris and Jory search frantically for the two women, Bart continues to deny any knowledge of their whereabouts and John Amos says that Corrine left voluntarily. The two are actually held in the cellar until an accident with a candle sets the mansion on fire and Bart names their location. Cathy, Chris, Bart and Jory escape though John Amos is burned in the fire. Corrine's clothing catches on fire as she tries to escape and she also dies. In the days following the fire, Jory and Cathy each note that Bart seems to have a tenuous hold on reality. Bart says that he believes the entire situation occurred so that he would know how to save Cathy and Chris.

More summaries and resources for teaching or studying If There Be Thorns.

If There Be Thorns from BookRags. (c)2022 BookRags, Inc. All rights reserved.