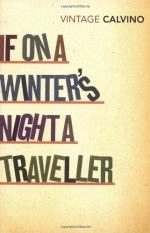 If on a Winter's Night a Traveler Summary & Study Guide

Italo Calvino
This Study Guide consists of approximately 40 pages of chapter summaries, quotes, character analysis, themes, and more - everything you need to sharpen your knowledge of If on a Winter's Night a Traveler.

If on a Winter's Night a Traveler Summary & Study Guide Description

If on a Winter's Night a Traveler Summary & Study Guide includes comprehensive information and analysis to help you understand the book. This study guide contains the following sections:

This detailed literature summary also contains Topics for Discussion and a Free Quiz on If on a Winter's Night a Traveler by Italo Calvino.

If on a Winter's Night a Traveler by Italo Calvino is a tale of mystery, intrigue, and a blending of literary styles that leaves the reader seeking not only the ending for the main story, but also the ending of ten different novels. Calvino uses different plots, styles, and voices to create a whirlwind novel that leaves the reader confused at times, but also intrigued. His mastery of second-person writing along with the ease in which Calvino is able to switch plot lines amounts to an excellent novel filled with new twists at every turn.

The book begins in second-person with a single reader, you, having just purchased the new Calvino novel. As the reader nears the end of the first chapter, however, he realizes the book is misprinted and does not contain the entire novel. The reader returns the book to the store only to be given a different novel, Outside the Town of Malbork, as the one he originally began to read is discovered to be another book completely. The reader meets the "Other reader," Ludmilla, who has had the same experience. However, the two soon learn Outside the Town of Malbork is not the first book they began to read, and the two set off on a journey to find at least one complete novel.

After discovering the second book is also defective, the two meet with a professor of literature who assures them the second book is really Leaning from the Steep Slope. On hearing the professor translate it, however, they discover Leaning from the Steep Slope is a completely different book as well, but interesting. When the professor tells them the book is not complete, Lotaria, Ludmilla's sister, tells them they can find the complete book within Without Fear of Wind or Vertigo. On listening to a reading, however, the two realize this, too, is an incomplete book. The reader travels to the publishing house only to discover a web of mystery surrounding a translator, Marana, and a complicated plot to flood the world with apocrypha. As the reader unravels the thread of Marana's past, he soon discovers Ludmilla is the center of Marana's crimes and the focus of a writer, Flannery, in his own attempt to write a novel that several underground organizations wish to obtain for their own needs. Lotaria, too, is involved in a revolution to spread falsehood amidst the literary world, and the reader finds himself in a position of a double agent, just to secure his own freedom and to find a single complete book. In the end, the reader is reminded of why people read, and learns that the really good books of the world never end, but live on in people's minds forever.

More summaries and resources for teaching or studying If on a Winter's Night a Traveler.

If on a Winter's Night a Traveler from BookRags. (c)2022 BookRags, Inc. All rights reserved.