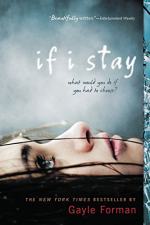 Get If I Stay from Amazon.com
View the Study Pack
View the Lesson Plans
Study Guide
Order our If I Stay Study Guide

If I Stay Symbols & Objects

Gayle Forman
This Study Guide consists of approximately 23 pages of chapter summaries, quotes, character analysis, themes, and more - everything you need to sharpen your knowledge of If I Stay.

Mia is a serious student of classical music, and she excels as a cellist. Her cello is a symbol of all that music means to her past, present, and future.

Punk rocker Adam dressed as Mozart for Halloween, while classical musician Mia dressed as a rocker chick. Their willingness to dress completely out of character is proof that they respected and embraced their differences as well as their similarities.

Even though the car was destroyed in the accident, the radio continued to play. This symbolizes the role music played in the lives of Mia's now-dead parents and the role it would continue to play in her own life.

Mia's father once wrote a song called "Waiting for Vengeance." The lyrics meant a lot to her when she first learned them, but they come to mean even more as...

If I Stay from BookRags. (c)2020 BookRags, Inc. All rights reserved.