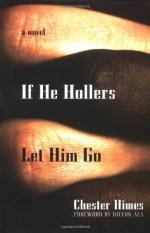 If He Hollers Let Him Go: A Novel Summary & Study Guide

If He Hollers Let Him Go: A Novel Summary & Study Guide Description

If He Hollers Let Him Go: A Novel Summary & Study Guide includes comprehensive information and analysis to help you understand the book. This study guide contains the following sections:

This detailed literature summary also contains Topics for Discussion and a Free Quiz on If He Hollers Let Him Go: A Novel by Chester Himes.

Written in the 1940s, this novel fictionalizes the experience of being black in America at a specific time in the country's history - the early days of its involvement in World War II. The experience of being at war nationally is mirrored on a smaller scale in the struggle of the book's central character, Robert Jones, as he attempts to wage a personal war against racism. Other themes explored by the narrative include the nature of freedom and, on both a literal and metaphorical level, the tension between darkness and lightness.

As the novel begins, Robert Jones recalls a series of dreams that caused him to wake in fear and foreboding, feelings that, as he reveals in narration, he wakes with more often than not these days. His fears, he writes, include fear of the war and of being forced into the army, fear of the racism around him, fear of being unable to realize his ambition of simply being a man. As he gets ready for work, commenting on how powerful he feels in his uniform, he flirts with his house mate Ella Mae, asking her if she ever feels scared. She doesn't answer and sends him off to his job at a shipyard, where he has been newly promoted to a position of responsibility and leadership.

That day at work, the dark skinned Jones has an encounter that changes his life - a white woman, Madge, refuses to work for him because he's a "nigger". Realizing that her attitude originates in a combination of racist fear and racially defined lust, Jones loses his temper with her. This, in turn, leads him to confrontations with his supervisor, who expresses disappointment that Jones has betrayed the company's hopes in him (that he would be an example of how to conduct positive race relations) and then demotes him. Frustrated and angry, not to mention nearly murderous after an encounter with a hostile white man, Jones leaves work early and struggles to sort out both his feelings and his intentions.

Meanwhile, Jones also struggles to define and secure his relationship with the paler skinned but still black Alice Harrison, whose parents have achieved a measure of social and economic success in the white world and who have convinced themselves that they are, in fact, leaders in the transition into a unified society. Jones struggles to accept both their perspective and the conditional nature of Alice's love; she says she will only stay with him if he apologizes to Madge and to his bosses. At first he refuses, but when she convinces him that happiness is indeed possible living and working within the boundaries of the racist system of segregation, he agrees to do as she says.

Back at work, Jones begins to make amends with Madge and his co-workers, but is manipulated into planning revenge on Madge by a white co-worker, who gives him Madge's address. That night when Jones visits her, he is put off by her eagerness to use him sexually and leaves her frustrated when he refuses to have sex with her. The next day, as he is continuing his efforts to behave the way his supervisors want him to, Jones has a random encounter with Madge, which results in her shouting out that she is being raped. He realizes that there's no way that anyone will believe his version of the story and tries to escape, deciding that if he's going to be put in jail he might as well be guilty of something. He takes his gun to go and kill the hostile white man. A chance encounter with some patrol police officers results in their discovery of the gun. Jones is recognized as wanted on the rape charge and jailed.

In the book's final chapter, Jones is visited in jail by the owner of the shipyard where he works, who tells him that Madge has decided to not press charges. Jones, in narration, reveals his belief that she told the truth of what happened but the company has decided to spin the circumstances in their favor and against his. A judge then tells Jones that to avoid prosecution on a charge of gun possession, he can join the army. Jones feels he has no choice but to agree.

If He Hollers Let Him Go: A Novel from BookRags. (c)2022 BookRags, Inc. All rights reserved.