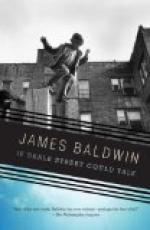 James Baldwin
This Study Guide consists of approximately 72 pages of chapter summaries, quotes, character analysis, themes, and more - everything you need to sharpen your knowledge of If Beale Street Could Talk.

If Beale Street Could Talk Summary & Study Guide includes comprehensive information and analysis to help you understand the book. This study guide contains the following sections:

This detailed literature summary also contains Quotes and a Free Quiz on If Beale Street Could Talk by James Baldwin.

The following version of this book was used to create this study guide: Baldwin, James. If Beale Street Could Talk. Vintage Books, a division of Penguin Random House. New York, NY. First Vintage Movie Tie-in Edition, October 2018. The story is told from the first-person perspective of Tish, a young, pregnant black woman desperate to find ways of getting her husband out of jail and ensuring that their baby lives a life of freedom, surrounded by a loving family.

The story is told in two parts. The first, “Troubled About My Soul,” begins with Tish bringing the news of her pregnancy to her husband. Her given name is Clementine, his is Alonzo, but in the same way as she goes by a nickname, so does he: everyone close to him calls him Fonny. Tish worries about his reaction, and that of both their families, but is relieved when he reacts with joy and hope, and her family reacts with love and support. Fonny’s father (Frank) is similarly pleased, but Fonny’s extremely religious mother (Alice) and two sisters are negative and judgmental, a confrontation between the two families ending with Frank knocking Alice to the floor.

The book’s main narrative line continues to follow Tish in the present – as she continues to visit Fonny in prison, as her family (who sees Fonny as one of their own) mobilizes to do whatever they can to get him out, and as his young white lawyer earns their trust through his apparently intensifying commitment. There are, however, several obstacles to Fonny’s freedom, including a racist police officer, a racist judge, and the woman who has accused Fonny of rape, whom everybody thinks is lying and who, much to Tish’s frustration, disappears.

A second narrative line unfolds at the same time as the first, as Tish recalls the beginnings of her relationship with Fonny. She describes their noticing each other as children, their growing closeness as teens, and the moment when they both realized that their connection went deeper than either had believed. As she recalls their life together, Tish also describes Fonny’s passion for creating art out of wood or stone; the intensity of their sexual relationship; and how a friendly white landlord made it possible for them to start thinking about their future as a married couple.

Past and present narrative lines continue to unfold concurrently as Tish’s mother (Sharon) travels to Puerto Rico in an ultimately unsuccessful attempt to talk the accuser into admitting the truth of what happened, and as Tish recalls a racism-defined encounter between herself, Fonny, and the white police officer (Bell) whose testimony is proving key to Fonny’s case. Sharon returns home with news that the accuser has again disappeared; and Tish recalls how, shortly before Fonny’s arrest, Bell sexually harassed her, but she escaped. Shortly afterwards, she says, Fonny was arrested. Tish’s description of the arrest ends Part One.

Part Two, “Zion,” begins with Tish’s description of Fonny’s dream of carving, then continues to follow the present-day narrative line: there are no more flashbacks. With the second disappearance of the accuser, Fonny’s trial is put off, and the families have to work harder (and make more money) to make sure it does not get put off indefinitely. Meanwhile, it is coming closer to the time when Tish is supposed to have her baby. At one point, Frank (Fonny’s father) is fired from his job for stealing. Shortly afterwards, and on the day Tish goes into labor, Frank’s body is discovered in his car, an apparent suicide.

The novel ends with Tish imagining Fonny carving, and the baby screaming “like it means to wake the dead” (197).

More summaries and resources for teaching or studying If Beale Street Could Talk.

If Beale Street Could Talk from BookRags. (c)2022 BookRags, Inc. All rights reserved.