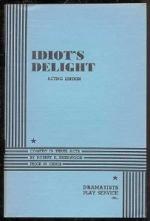 Harry and Irene sit alone in the bar, and he listens to the story of her childhood with interest and a bit of skepticism. Her tale of being wounded by the Bolsheviks, of dragging her dying father through the snow and of their final rescue by daring Americans seems a bit too dramatic for this woman.

He studies her face throughout their discussion, and she comments on his rudeness. It finally occurs to him that he has met her before. She had been in the audience of several performances he gave with a Russian mind reader in Omaha, Nebraska several years ago.

It is Irene's platinum hair that has confused him. Her hair had been wildly red when he knew her back in the States. She had wanted to know the tricks of his act so desperately that she had gone...