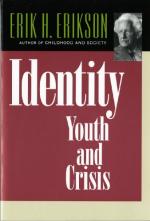 Erik Erikson
This Study Guide consists of approximately 27 pages of chapter summaries, quotes, character analysis, themes, and more - everything you need to sharpen your knowledge of Identity, Youth, and Crisis.

This detailed literature summary also contains Topics for Discussion and a Free Quiz on Identity, Youth, and Crisis by Erik Erikson.

Identity, Youth and Crisis, written in 1968, is one of the most important works on the psychology of adolescence in the twentieth century. It aims to synthesize the individualistic methodology of Freudian psychoanalysis with the other social sciences. Erik Erikson (1902-1994), the author and a Danish-German-American psychologist was one of the most significant theorists in human psychology of his day. In 1950, he rose to prominence as a result of his book, Childhood and Society, a central text in the study of child development. Identity, Youth and Crisis follows eighteen years later; but at a theoretical level, it picks up where Childhood and Society left off.

In Childhood and Society, Erikson develops a famous periodic analysis of child and youth psychological development which he first applied to children. Initially, he built upon Freud's five stages of development but in later work such as Identity, Youth, and Crisis, his conception of development became less Freudian. For Erikson, each child and youth must navigate eight stages of development that are characterized by identity crises. The focus of Identity, Youth and Crisis is to deepen Erikson's concept of personal identity and explain its relation to what he calls ego psychology.

Erikson's theory of ego psychology holds that the ego, an unconscious mental process, constantly synthesizes information from inner and outer perception into a coherent whole that can be managed. In this way it brings together the inner world of the individual with the outer social world and acts as the boundary between the two. The ego constructs identity, which has both an individual and a social element. One of Erikson's main emphases in Identity, Youth and Crisis is that the identity crisis of the adolescent is severe. The adolescent has developed enough of an identity to be self-reflective and yet he must navigate between a desire for uniqueness and a desire to join significant social groups, culture and society. Psychological dysfunction in youth occurs when a number of factors, but most often anxiety arising from the challenges of development, causes the youth to veer too far off in either direction, leading to deviancy on the one hand and totalitarian submission on the other.

Identity, Youth, and Crisis is composed of a number of articles that Erikson wrote over the course of his career following Childhood and Society in 1950, but they are nonetheless tied together. In the prologue, Erikson introduces his concept of identity and explains its theoretical virtues and that it is constructed with the aim of integrating individual and society. Chapter 2, Foundations in Observation brings out some concrete cases of the theory mentioned in Chapter 1 and outlines a theory of totalitarian psychology.

Chapter 3 explains Erikson's famous eight stage life-cycle theory of ego development and Chapter 4 discusses ego malfunction in the form of 'identity confusion' and 'identity diffusion.' Chapter 5 is a 'theoretical interlude' that covers a number of issues about the proper use of psychological concepts. Chapter 6 focuses on the challenges facing contemporary youth in the late 1960s, Chapter 7 on female psychology and the growing women's movement, and Chapter 8 on race and national identity psychology.

More summaries and resources for teaching or studying Identity, Youth, and Crisis.