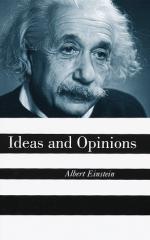 "On Politics, Government, and Pacifism" opens with an essay written shortly after World War I that calls on lesser scientists not to be isolationists. Economic pressure will force even the most reactionary scientists to cooperate. In "A Farewell" (1923), Einstein explains his relations with the League of Nations' Committee of Intellectual Cooperation, which at least embodies the principle "something must be done". It dates from 1926, when European politicians realize trade barriers must fall, and generous French funding of a permanent Institute hopefully will not prove politically biased.