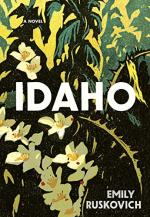 Emily Ruskovich
This Study Guide consists of approximately 80 pages of chapter summaries, quotes, character analysis, themes, and more - everything you need to sharpen your knowledge of Idaho.

This detailed literature summary also contains Quotes and a Free Quiz on Idaho: A Novel by Emily Ruskovich.

The following version of this book was used to create this study guide: Ruskovich, Emily. Idaho. Random House, 2017.

Idaho is a novel about family, forgiveness, and memory. Author Emily Ruskovich presents readers with numerous fragmented chapters. The story takes place between 1973 and 2025, but the novel is not presented chronologically to readers. As the jumbled years’ events are revealed, the chapters move from one characters’ perspective to the next, with all chapters remaining in a third-person point of view. This bird’s-eye viewpoint over the storyline allows Ruskovich to deeply delve into the internal psyches of all characters involved. Chapters are rich with descriptions and dominated by internal dialogue, fears, hopes, regrets, and memories.

Wade Mitchell, a knife maker who lives on a remote portion of Mt. Iris near Ponderosa, Idaho, is the central character of the novel. He meets his first wife, Jenny, on a farm when he is only 19 years old. The two of them wed and endure heartbreak at the beginning of their marriage. The newlyweds live on Camus Prairie, where they have both grown up. Wade’s father, Adam, has early onset dementia, which is something Wade knows is inevitable in his future as well. Adam dies in the winter of 1973 when he becomes lost walking home and freezes to death on the street. While mourning the loss of his father, Wade and Jenny also try to conceive a child but are unsuccessful for ten years. Wade moves them away from the monotonous landscape of the prairie and over to the varied landscape of Mt. Iris. There, Jenny and Wade become pregnant almost as soon as they move in, but their good luck stops there. They learn that the previous landowner lied to them about the property. Winter sets in quickly and the couple is left up on the mountain, trapped all winter long. Wade walks the six miles to the main road and hitchhikes to the market each week, and Jenny is left to keep herself busy in the meantime. She grows more and more bored, and eventually, Jenny looks through Adam’s old belongings. She discovers that, in his dementia, Adam found an old childhood photo of him and a girl form the neighborhood. He misinterpreted the people in the photograph to be his own children, his beloved son and his forgotten, ill-treated daughter, June Bailey Roe. Adam sent June close to $10,000, thinking it would repay her for his absence in her childhood. Jenny asks Wade to write June and demand the money back, but June never responds. Wade is upset about his father squandering his money, but he is mostly hurt that Adam forgot about him yet remembered a girl from his childhood. Wade feels as though he never truly mattered to his father, which is why Adam forgot him near the end. Jenny gives birth to a daughter. She names her Lily, but Wade asks her to change the name to something memorable: June.

Wade and Jenny live happily with their two daughters on Mt. Iris. June and May are close, but they bicker often . They love playing with dolls, and they have fun walking around their large property on the mountain. As June enters adolescence in 1994, she grows tired of playing with dolls and becomes very interested in boys. She especially likes a boy named Eliot and brings him one of her father’s beautiful knives as a present. However, Eliot left the school prior to her gift. His quick departure also shocked Ann, who was his choir teacher at Hayden Charter. Ann spots June leaving the present in Eliot’s locker, and she approaches the locker to see what June left him. When she sees that it is a knife, she calls a parent-teacher conference. This is when Ann meets Wade. They agree that June was in the wrong, and Wade asks Ann to give him piano lessons because he has heard it prevents memory loss. They begin piano lessons until the night that Ann sees Wade’s family on the news. Jenny confesses to killing her daughter, May, and June is missing. Jenny had killed May with a hatchet while the Mitchells were all out together to buy lumber

Wade does not attend piano lessons with Ann for a while after the murder. He eventually reappears and begins again with the lessons as though nothing bad had happened. Ann cares for Wade very much. She promises that she can take care of him, and Wade agrees to marry Ann. The two are married before ever kissing, going on a date, or making love. Ann quits her job at Hayden Charter and moves to Mt. Iris with Wade, where she is overrun by all of the care Wade requires. His memories begin slipping and his behaviors turn strange. Wade is constantly grief-stricken and, between his sadness and his dementia, he becomes abusive to Ann at times. Ann discovers that Wade punishes her as if she were a dog, shoving her head into the mess he blames her for and saying "no" over and over again. Ann learns that he is triggered by anything that reminds him of his happy family before her, and she accepts his behaviors as part of caring for him. Ann is consumed by the family tragedy. She is an outsider in Jenny’s home, despite the fact that Jenny is no longer there. Ann spends her days looking for trinkets from the family’s past, signs they were once a family unit living in the house. Wade never talks about that day on Mt. Loeil, which makes Ann skeptical about the facts she has heard from that day. Wade does not actively search for June for very long. He hopes for her return and allows Ann to be in charge of posting updated, age-progressed photographs in the local post office. Ann spends her life married to Wade and progressing into a position where she bears all of Wade’s burdens. Wade’s memories begin to leave him due to his dementia.

The novel also includes Jenny’s time in prison. She is sentenced to life at the Sage Hill Women’s Correctional Center, where she spends her first five years living alone and inside all day, every day. After this lonesome time period, Jenny is assigned to a cell with a woman named Elizabeth. The bed in the cell is only available because Elizabeth had just stabbed her cellmate, Sylvia, over the fact that she was convinced Sylvia was stealing her childhood memories away from her. Jenny lives with Elizabeth for 25 years. The two women become close friends despite their lack of conversation. Jenny hardly speaks anymore. She requests to work tasks where she is alone and cleaning something because she feels that she must now live her life paying penance for what she has done. Jenny goes to school for Elizabeth because she cannot attend the lessons. She takes detailed notes for her cellmate, which is a kindness Elizabeth does not know how to repay. Ann writes Jenny a letter in 2011 and informs her that Wade died. She feels as though she is finally free from the terrible memories of that day, but she also knows that the love of her life has died without ever visiting her at Sage Hill. More than a decade later, in 2025, Jenny is released from prison on parole.

Ann picks Jenny up from prison. She has prepared a nice apartment for Jenny in the town of Moscow, Idaho, a town Jenny has chosen and Ann does not understand. Ann lives all alone on Mt. Iris after Wade passes. She is shocked to learn just how much of herself she has lost over the course of her marriage. She begins playing music again, and she composes songs that explain her chaotic life with Wade. She does not want to be alone any longer, so she decides to sell the house and the land and move back to the U.K. where she can be close to the remaining members of her family. Picking up Jenny is the last thing Ann will ever do in the U.S. The two women drive for a few hours, barely exchanging words. Ann pulls over to take a break and to dip their feet in a small river nearby. Jenny mentions a story from her time with Wade about a mountain lion leaping up from the same river at which Ann and Jenny are now standing. Ann smiles and mentions that Wade told her that story. This makes Jenny smile for the first time in a long time, and this is the moment in which Ruskovich ends the novel.

More summaries and resources for teaching or studying Idaho: A Novel.