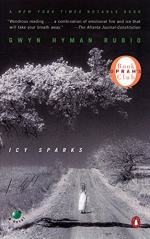 Gwyn Hyman Rubio
This Study Guide consists of approximately 40 pages of chapter summaries, quotes, character analysis, themes, and more - everything you need to sharpen your knowledge of Icy Sparks.

This novel is titled after its first-person narrator, Icy Sparks. At the beginning of the novel it is 1956, and Icy Sparks is a 10-year-old girl who lives with her grandparents, nicknamed Matanni and Patanni, after both of her parents passed away at an early age. They live a pleasant and quiet life together on the small family farm in Poplar Holler, which is outside the quiet town of Ginseng, Kentucky. One of Icy’s closest friends is Emily Teller, the friendly but dramatically overweight owner of Teller’s Feed Supply, in town. Icy lives a mostly idyllic childhood, but is sometimes overcome by an uncontrollable urge to contort and twist her body, usually for several minutes at a time, which she attempts to hide by hiding in her family’s root cellar. However, after being unable to hide an episode one day while in town, she is made fun of at the movies by a boy from her school, which she responds to by pouring a Coke on him.

As Icy begins fourth grade, her symptoms begin to worsen due to her incredibly strict new teacher, Mrs. Stilton. Although Mrs. Stilton can be seen demonstrating kindness to other students, she is most strict with Icy, frequently challenging her on an almost psychological level. Icy has a number of uncontrolled outbursts in the class, but is helped by the kindly principal, Mr. Wooten, to work at her own pace in a converted supply closet. However, as Icy’s condition worsens, she is shortly sent by her grandparents to the Bluegrass State Hospital several hours away.

At the hospital, Icy is living with a handful of other child patients who all have a mental disability of some sort, with many of them unable to speak verbally. Icy is encouraged to show empathy for the other patients by the incredibly kindly aide, Maizy. Icy also has several one-on-one counseling sessions with the also-kindly Dr. Conroy, during which Icy philosophically examines her competing good and bad natures. However, Icy is also haunted by Wilma, a rude and abusive aide, who is mean to everyone in the facility. Although Icy is disappointed to learn that she must stay at the hospital past Christmas, she eventually becomes excited about participating in the small Christmas play, thanks to Maizy. However, during the play itself, Wilma trips Icy on-stage. After the doctors at the facility attempt to give Icy a number of sleep-inducing medications over the next few weeks, Dr. Conroy notifies Icy that she will be returning home, after Dr. Conroy gives Icy one last lesson on attempting to substitute big feelings for small feelings when she feels her anxiety building. At Icy’s farewell party, she learns that Wilma is no longer on the staff.

Despite the help that Icy receives at the hospital, the next few years are the most deeply unpleasant of her life. Icy begins to be home-schooled, with the assistance of Mr. Wooten and Emily, and quickly becomes deeply afraid of going into the town for any reason. Icy begins a secret romance with one of her former classmates, Peavy Lawson, meeting once a week in a distant field while Peavy takes breaks from working on a nearby farm. Although Icy quickly fantasizes about beginning a family with Peavy, she abruptly cuts the relationship short when she suddenly sees him as ugly and undesirable, and begins yelling at him while they are kissing. Icy is also taught by Emily, in addition to the schoolwork, that they are both destined to be alone forever.

Icy’s grandfather quietly passes away in the fall of 1960. Some months later, Icy’s grandmother explains that she wants to begin going to church in order to build community. Icy protests, as she knows that both her grandfather and Emily don’t approve of church. However, Icy’s grandmother begins to experience dramatic positive changes, and Icy is eventually forced to come along to a big tent revival, which Emily joins for as well. Despite Emily’s previous misgivings, she suddenly becomes enthusiastic about the church when the charismatic preacher emphasizes that fat people are welcomed into the church. Emily becomes deeply excited when the preacher welcomes her onstage and gives her a big hug. Although Icy feels deeply lonely in this moment, and attempts to leave the tent, instead of an outburst she begins to be entranced by the song the congregation begins singing about love, and she joins, singing louder than anyone else in the tent.

The experience leads Icy to effectively mature overnight, overcoming many of her social anxieties. She initiates a friendship with a lonely and tortured neighbor, Mamie Tillman. Icy also feels a deep peace from singing and tries out for all five church choirs that will compete with one another on the Fourth of July. Icy is surprised that she is accepted into all five. Although Icy fears that there may be a conflict of interest when the Fourth of July comes, instead each of the five choir directors encourage her to sing with each choir. In a brief Epilogue, Icy describes how she went on to go to college and then become an effective and supportive child therapist.

More summaries and resources for teaching or studying Icy Sparks.