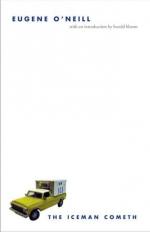 Introduction & Overview of The Iceman Cometh

This detailed literature summary also contains Bibliography and a Free Quiz on The Iceman Cometh by Eugene O'Neill.

Written in 1939, Eugene O'Neill's The Iceman Cometh was not produced until seven years later, largely because O'Neill was concerned that America was not ready for the play's dark vision. When it was staged in 1946, the play received mixed reviews. By that time, O'Neill was already an internationally-known playwright. In addition, the 1946 production marked the end, for O'Neill, of a twelve year absence from Broadway. Critics praised the play's passion, suspense, and well-drawn characters but complained about its prosaic language, redundancy, and excessive lengththe play runs for almost four hours. In 1956, The Iceman Comethwas revived and this time, widely acclaimed as a masterpiece that would ensure for O'Neill a place among the greatest of modern dramatists. There have been numerous revivals of the play since.

The Iceman Cometh is noted for its dark realism; its setting and characters closely resemble real life. The world of the play is a cruel place. Despair is a constant presence, love only an illusion, and death something to which one looks forward. Relief comes in alcohol and pipe dreamsgroundless hopes for a future that will never arrive. Some critics find hope in the characters' camaraderie and endurance. Others consider such a reading too optimistic, believing O'Neill's vision to be unremittingly dark.

In spite of critical disagreement, however, the importance of The Iceman Cometh to twentieth-century theater is undisputed. It is truly a modern classic, considered by many to be the greatest play by one of America's greatest playwrights.