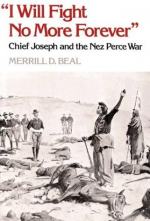 Introduction & Overview of I Will Fight No More Forever

Chief Joseph
This Study Guide consists of approximately 26 pages of chapter summaries, quotes, character analysis, themes, and more - everything you need to sharpen your knowledge of I Will Fight No More Forever.

I Will Fight No More Forever Summary & Study Guide Description

I Will Fight No More Forever Summary & Study Guide includes comprehensive information and analysis to help you understand the book. This study guide contains the following sections:

This detailed literature summary also contains Bibliography on I Will Fight No More Forever by Chief Joseph.

"I Will Fight No More Forever" is the name given to the speech made by Chief Joseph of the Nez Perce on October 5, 1877, when the Nez Perce were forced to surrender to Colonel Nelson Miles and General O. O. Howard after the Battle of the Bear Paw Mountains. General Howard led the U.S. soldiers who, for over four months, had chased the Nez Perce—men, women, and children—from their native lands in the Wallowa Valley of eastern Oregon toward Canada. Colonel Miles came to the general's aid when it looked as though the Nez Perce might escape. Chief Joseph gave his speech to the general's adjutant (administrative staff officer), but it was also documented by journalists who had been following the progress of the Nez Perce retreat. It appeared in printed form in the November 17, 1877 issue of the magazine Harper's Weekly. Only sixteen sentences long, the speech is almost poetic in its simple brevity.

In a speech given in 1879, quoted in Native American Testimony: A Chronicle of Indian White Relations from Prophecy to the Present, 1492–1992, edited by Peter Nabokov, Chief Joseph described the Wallowa Valley where he had grown up, and where his father and other ancestors were buried, as "that beautiful valley of winding waters" that he loved "more than all the rest of the world." The valley remained safe from white encroachment until the middle of the nineteenth century, when a series of unfavorable treaties gradually shrank the Nez Perce territories. Although U.S. government officials promised to protect the heart of the Nez Perce lands from white settlement, in the spring of 1877 they broke this promise, demanding that the Nez Perce leave. Chief Joseph worked to avoid violence during the preparations for departure; however, a series of violent skirmishes broke out between incoming whites and some of the Nez Perce. The military responded but unsuccessfully fought against the Indians in the first battle of what came to be known as the Nez Perce War. The military called in reinforcements, and they pursued the Nez Perce for more than one thousand miles. The war ended with Chief Joseph's surrender that fall, but his struggle to return his people to their land was not yet over. For many years, living in exile, he continued to use his great skills as an orator and statesman to explain the history of relations between the natives and the colonists in the Northwest United States and to ask for justice and the return of the Wallowa Valley. He and his people were never allowed to return.

Although Chief Joseph was not himself a warlord, his surrender speech solidified his place in the minds of Americans as a powerful Indian leader—for a long time many believed he was the one who had led the greatly outnumbered Nez Perce in a series of military victories against the U.S. army. In actuality, Chief Joseph was a spokesman for and caretaker of his people, not a military leader. In his surrender speech, for instance, he focuses on the Nez Perce people's lack of food and blankets, and his desire to locate the children who had been lost during the fighting.

More summaries and resources for teaching or studying I Will Fight No More Forever.

I Will Fight No More Forever from BookRags. (c)2022 BookRags, Inc. All rights reserved.