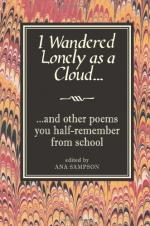 I Wandered Lonely as a Cloud Symbols & Objects

This Study Guide consists of approximately 15 pages of chapter summaries, quotes, character analysis, themes, and more - everything you need to sharpen your knowledge of I Wandered Lonely as a Cloud.

Though the image of the cloud appears only in the first line of the poem, Wordsworth effectively uses it as a symbol of solitude and isolation. He does so by associating the cloud as an object with loneliness in saying “I wandered lonely as a cloud” (1). Unlike the other aspects of nature described in the poem that are grounded to the earth, such as the flowers and the trees, the cloud drifts weightlessly across the sky, and thus it can never know the “vales and hills” over which it floats (2). Nothing more than a passive observer, the wayward cloud alluded to by the poet is alienated from its surroundings and is in many ways detached from the environment in which it exists.

The daffodils are primarily symbols of the profound impact of nature on the human spirit. As the speaker wanders through the...

More summaries and resources for teaching or studying I Wandered Lonely as a Cloud.

I Wandered Lonely as a Cloud from BookRags. (c)2020 BookRags, Inc. All rights reserved.