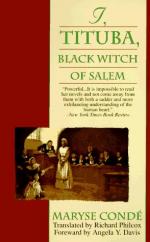 Maryse Condé
This Study Guide consists of approximately 44 pages of chapter summaries, quotes, character analysis, themes, and more - everything you need to sharpen your knowledge of I, Tituba, Black Witch of Salem.

This detailed literature summary also contains Topics for Discussion and a Free Quiz on I, Tituba, Black Witch of Salem by Maryse Condé.

"I, Tituba ..." is a fictionalization of the real-life experiences of a black woman tried as a witch in 1600s America. The stern, rigid, Puritanical Christianity of the time is a vivid contrast, and powerfully defining context for the journey of personal transformation undertaken by the title character as she struggles to sustain her spiritual, racial, and gender identity. While its primary thematic concern is with discrimination and its manifestations, the narrative also explores themes relating to the corrupting power of revenge and the cycle of birth, death and rebirth.

The narrative is introduced by a Forward written by noted American activist Angela Davis, who portrays the book as giving voice to persecuted minorities (blacks, women, non-Christian) who have, as the result of the dominant influence of white, male, Christian power structures, been oppressed for centuries.

The story proper, told in first person past tense narration, begins with Tituba's description of her conception (the result of her mother, a black woman from Africa, being raped on a slave ship by an English sailor). After narrating the circumstances of her child, Tituba describes Abena's death by hanging for resisting the sexual advances of her white owner. The incident, Tituba comments in narration, haunted her for the rest of her life. She then then describes her adoption by Mama Yaya, an elderly wise woman who used herbal medicine and spiritual techniques to heal the sick and communicate with the dead, and who taught Tituba everything she knows. After Yaya dies, Tituba moves onto an isolated farm where she practices her healing techniques. She falls in love with the handsome, sexy, charismatic John Indian, and against her better judgment (and the advice of the ghostly Abena and Yaya) moves into his home on the estate of white slave owner Susanna Endicott.

Tituba soon realizes that she has compromised herself and her identity by allowing herself to be put into a position of submission to Susanna, but her desire to be with John Indian is too strong for her to leave. Her efforts to take revenge on the autocratic, patronizing Susanna (by using herbs and magic to make her ill) end up backfiring, and she (Tituba) is sent with John Indian to America as the property of ultra-religious pastor Samuel Parris. The ultra-Christian community to which Parris and his household are eventually posted (Salem, Massachusetts) treat Tituba with mistrust, as she has gained the reputation and status of a witch. Eventually, as the apparent result of what Tituba firmly believes are the manipulations of Parris' niece Abigail, Tituba is tried for witchcraft and imprisoned.

Tituba is rescued from prison by Benjamin Cohen, a Jewish merchant who, as Tituba suggests in narration, has been subject to as much persecution as she has. She and Cohen begin an intense, often sexual relationship, which is eventually ended by anti-Semitic attacks that destroy both Cohen's family and his business. He sends Tituba back to Barbados, where she is at first welcomed as a kind of heroine by the Maroons, a group of ex-slave rebels. Their tendency towards violence, however, drives Tituba to return to her farm, which she discovers is still essentially intact after her absence of several years.

As she re-settles herself into what was once her life, Tituba finds herself drawn into an anti-white rebellion led, in part, by the youthful and impulsive Iphigene, whom Tituba takes into her home. As the plans of Iphigene and his fellow rebels near fruition, Tituba experiences heightened foreboding and omens of doom. The rebellion is thwarted, and both Iphigene and Tituba are executed for their role in it. A brief epilogue, still written in Tituba's first person narration, describes her fulfilling existence as a spirit, and expresses optimism for the future of black people.

A lengthy Afterword contains an interview with the author in which she discusses the circumstances and intent with which "I, Tituba ..." came into being.

More summaries and resources for teaching or studying I, Tituba, Black Witch of Salem.