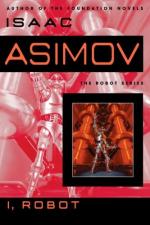 Get I, Robot from Amazon.com
View the Study Pack
View the Lesson Plans
Study Guide
Order our I, Robot Study Guide

Isaac Asimov
This Study Guide consists of approximately 24 pages of chapter summaries, quotes, character analysis, themes, and more - everything you need to sharpen your knowledge of I, Robot.

I, Robot Summary & Study Guide includes comprehensive information and analysis to help you understand the book. This study guide contains the following sections:

This detailed literature summary also contains Quotes and a Free Quiz on I, Robot by Isaac Asimov.

I Robot is the first in the Robot Series by Isaac Asimov. In this novel, Asimov discusses the three laws of robotics and how they have influenced the development of robots over the years. The novel begins with an interview by a reporter of Susan Calvin, a robopsychologist who specializes in making robots seem more human. Susan tells the reporter several stories about robots that illustrate these rules and how they have impacted the development and actions of robots over the years. I Robot is a futuristic novel that leaves the reader with a vision of a future that could one day be reality.

Susan Calvin is a robopsychologist who has worked with US Robot and Mechanical Men most of her career. Now in her seventies, Susan Calvin is being interviewed by a reporter about her experiences with robots. Susan begins the interview with a story about a robot named Robbie who was a nursemaid to a young girl in the early nineties. This robot was very beloved by the child it was purchased to care for, but the neighbors, and even the child’s mother, felt the robot could be a danger. For this reason, the robot is sold back to Us Robot and Mechanical Men. However, the child has such a hard time without the robot that the father arranges for the child to see the robot again. During this visit, the child falls into danger and the robot saves her, causing the mother to relent and allow the robot to return to the family.

Dr. Calvin continues by describing how robots were banned from earth so US Robot began using robots to work on space colonies on other planets. In one story, Dr. Calvin describes how orders caused one robot to become unbalanced, acting drunk, because of a conflict between the second and third laws. A researcher had to place himself in mortal peril to break the robot out of its state. Later, on another space station, a robot became so self-aware that it began to believe that it was created by a machine rather than man despite a demonstration that showed the robot the truth. This belief, however, did not interfere with the three laws, so researchers decided to leave the robot alone.

Dr. Calvin also discusses the development of a robot who could read minds. This robot told the scientists working with it what it knew about them and the people around them. However, it was soon discovered that this robot had the capacity to lie. In order to adhere to the first law, the robot would tell the scientists what they wanted to hear rather than the truth to protect their feelings.

As technology and the use of robots increased, so did the difficulties experienced with robots. Dr. Calvin recalls one situation in which the first law was modified in certain robots in order to allow them to behave in a specific way. This modification allowed one robot to hide among others, making it important that it be identified and removed before this modification could be discovered. Dr. Calvin had to trick the robot by placing herself in danger and using a radiation field that only this specific robot would know was not dangerous.

When Dr. Calvin returned to earth after this experiment, she learned that a rival company had attempted to feed their superbrain a specific problem that caused it to malfunction and now they were offering US Robots a deal to use their superbrain robot. Due to the fact that they believed their brain to be superior, US Robots fed the problem to their brain who in turn built a spaceship that could leap through time. To do this, the robot had to disregard the first law to a certain degree, something Dr. Calvin gave it permission to do.

Dr. Calvin continues the interview by telling the reporter about a politician she once had the occasion to know. This politician was accused by his opponent of being a robot. The man refused to go along with any of the tests his opponent insisted he submit to based on the argument of personal privacy. However, the day of the election this politician hit a man in public after he was accused once again of being a robot, apparently proving he was not a robot as a robot could not hurt a human. However, Dr. Calvin would later theorize that the man the politician hit was also a robot.

Dr. Calvin ends her story by relating a problem the politician, by now the World Coordinator, was having with the five superbrain robots that aided in governing the world. These robots appeared to making, or influencing, mistakes in each of the territories. The World Coordinator investigated each of these mistakes and came to the conclusion that humans were attempting to influence the superbrains to further the influence of anti-robotic groups. The World Coordinator was set to outlaw these groups when Dr. Calvin explained to him that the robots had caused this mistakes themselves to prevent future economic problems with the anti-robotic groups, thus adhering to the first law of robotics to protect humans at all costs, in this case by preventing future wars.

Dr. Calvin’s story illustrates for the reporter, and reader, the development and adherence to the three laws of robotics.

More summaries and resources for teaching or studying I, Robot.

I, Robot from BookRags. (c)2022 BookRags, Inc. All rights reserved.