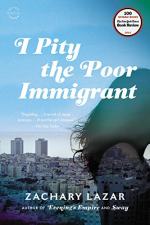 I Pity the Poor Immigrant Quotes

Importance: The book's premise is that it's a memoir by a fictional freelance crime reporter named Hannah Groff. She sets out to write an article about the death (and probably murder) of Israeli writer David Bellen. The article results in someone from her past reentering her life with a story Hannah isn't certain she believes, but that leads her from Bellen to Jewish-American gangster Meyer Lansky and ultimately to face things about herself she never wanted to think about.

He wanted her blood for the Passover – that's what they said.
-- Meyer Lansky (chapter 2 paragraph 44)

Importance: Meyer Lansky is explaining to Israeli reporter Uri Dan why Lansky's family left Poland. A rabbi had found a raped and murdered Polish woman in the woods and local officials hanged him for the crime, citing this as the reason. Hannah Groff, the "author" of the novel, says she has avoided facing herself as a Jew...

I Pity the Poor Immigrant from BookRags. (c)2022 BookRags, Inc. All rights reserved.