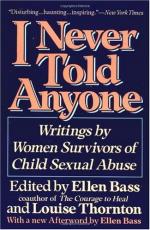 Ellen Bass
This Study Guide consists of approximately 36 pages of chapter summaries, quotes, character analysis, themes, and more - everything you need to sharpen your knowledge of I Never Told Anyone.

I Never Told Anyone: Writings by Women Survivors of Child Sexual Abuse Summary & Study Guide includes comprehensive information and analysis to help you understand the book. This study guide contains the following sections:

This detailed literature summary also contains Topics for Discussion and a Free Quiz on I Never Told Anyone: Writings by Women Survivors of Child Sexual Abuse by Ellen Bass.

I Never Told Anyone: Writings by Women Survivors of Child Sexual Abuse is an anthology of stories, essays and poems edited by Ellen Bass and Louise Thornton, among others. This book was inspired by a writing shop in which many of the students wrote about sexual abuse that took place in their past. The book is a moving collection that is designed to take away the secrets, to expose this terrible crime that takes place against children every day and to allow some of the victims to find a voice. I Never Told Anyone is powerful book that throws the doors open on the secret of sexual abuse and finally allows light to shine on the smallest victims.

I Never Told Anyone begins in part one with stories written by women who were abused by their fathers. Jude Brister wrote about a trip into the country to help her father build a cabin for his new family that resulted in nightly sessions of unspeakable abuse. Maggie Hoyal wrote about years of abuse from her father who believed that Maggie actually liked his unnatural attention. Yarrow Morgan wrote a poem based on recollections of abuse that began when she was only an infant, while Jean Monroe recalled being used as a sexual outlet for her father while her mother was hospitalized for tuberculosis. R.C. related a dream she often had in which she attempted to save the child she once was and Jill Morgan recalls being brutally raped by her father while her mother did all she could to ignore the obvious signs. Finally, Marty O. Dyke wrote a poem that drips with anger toward her father for the pain of the abuse he put her and her family through.

In part two, abuse by relatives, many women relate stories of abuse by grandmothers, stepfathers, and even brothers. Lynn Swenson's poem discussed the abuse her grandfather committed against her, and possibly her sister, while her grandmother lay sleeping in the next room. An excerpt from Maya Angelou's autobiography I Know Why the Caged Bird Sings was included here. Maya was only eight when her mother's boyfriend began molesting her. Two encounters soon led to a rape that culminated in Maya testifying against her rapist in open court. Maya lied about the previous molestations because she did not want her brother to know she had kept a secret from him. However, this lie would sit heavy on her shoulders for many years, changing the carefree personality that once so delighted her brother.

Blanche Woodbury contributed a poem about her brother who molested her when they were children. Desi wrote a sad account of the baths her grandmother would give her as a child, the tone one of a woman attempting to figure out how another woman could hurt her in such a way. Louise Thornton, an editor of this book, contributed a story not about her own abuse, but about an uncle who abused her cousin and attempted to abuse her brother. Louise found herself in a position of protecting this member of the family while at the same time wishing he would pay for his crimes. Bella Moon wrote a stirring account of sexual abuse suffered at the hands of a foster parent while Experience Gibbs discusses abuse by an uncle when she was just a small child.

In part three, abuse by friends and acquaintances, Lois Philips Hudson began with a short essay discussing the impact of abuse on creative women. Honor Moore contributed a poem about her abuse perpetrated by a respected member of her community when she was only five. An excerpt from Lady Sings the Blue, tells the story of how Billie Holiday, the blues singer, was nearly raped at the age of ten and jailed because of it. After going to the police for help, Billie was taken from her mother and sent to a Catholic institution as though the rape were her fault.

Karen Asherah continues this section of the book with the story of how a childcare worker her mother entrusted with her safety abused her and Naomi Schartz related in a poem how a trusted friend abused her after she turned to him for support after her father left the family. Miriam Monasch wrote of being molested by a teenage friend during a Fourth of July party while her parents were only a few feet away. The story of the Priest's Kiss not only addresses sexual abuse that Beverly Sky suffered, but a loss of faith that came about as a direct result of this priest's abuse. Finally, Jana Vincenti wrote a short story of how a boyfriend of her mother's attempted to rape her while her mother showered and Lillian Kelly contributed a poem of the lingering fear a sexual abuse victim carries around for the rest of her life, especially after the birth of a daughter.

In part four, sexual abuse by strangers, Jade Gates begins the section in a short essay that relates several incidences of sexual abuse perpetrated against her by strangers. In Shoes, Pat Parker relates how a love of shoes allowed a shoe store owner to lure her into his store and force her into oral contact with him. In a unique turn, Martha Rogers tells not her own story, but a story of a molestation that happened to her mother when she went to a fair with her brother and was touched by a stranger. From her book, Flying, Kate Millet relates a story of how a man offered her a ride home and then attempted to rape her on a deserted road. A successful model most of her teens and early twenties, Ann Simonton wrote Trophy girl to describe one of many abuses she suffered by men who equated model with sexual toy.

Chiggers, by Maureen Brady, begins as an innocent story of one child's summer, but becomes sinister when a stranger intrudes on what should have been a carefree school break. Mary Berger, too, had her summer ruined while staying at a tourist home one summer during the depression. A stranger molested her while she played on the swings. Hummy's story is one of the most heartbreaking of all in this collection. Hummy was raped repeatedly by a couple of handymen who thought they had every right to use her five year old body because she was an American Indian. Finally, in two stories of empowerment, Jean Alexander wrote to the soldier who molested her and expresses all her anger at his actions while Jennifer Meyer related how she was able to stand up to a possible attacker and defend her right to survive.

More summaries and resources for teaching or studying I Never Told Anyone: Writings by Women Survivors of Child Sexual Abuse.

I Never Told Anyone: Writings by Women Survivors of Child Sexual Abuse from BookRags. (c)2022 BookRags, Inc. All rights reserved.