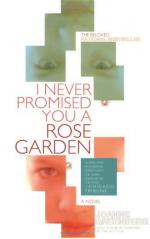 Early Twentieth Century: Hospitals for the mentally ill become overcrowded. Added to the list of patients are soldiers returning home from World War I and, later, people suffering from the psychological effects of the Great Depression.

Mid-Twentieth Century: In the United States alone, there are 560,000 people in mental hospitals. This number will be the peak of mental hospital populations.

Today: Admittance to mental hospitals is...

I Never Promised You a Rose Garden from BookRags. (c)2022 BookRags, Inc. All rights reserved.