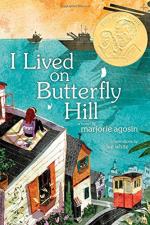 Marjorie Agosin
This Study Guide consists of approximately 52 pages of chapter summaries, quotes, character analysis, themes, and more - everything you need to sharpen your knowledge of I Lived on Butterfly Hill.

I Lived on Butterfly Hill Summary & Study Guide includes comprehensive information and analysis to help you understand the book. This study guide contains the following sections:

This detailed literature summary also contains Quotes and a Free Quiz on I Lived on Butterfly Hill by Marjorie Agosin.

“I Lived on Butterfly Hill” is a young adult historical novel by Marjorie Agosin which recounts several years in the life of Celeste Marconi as her homeland of Chile falls to fascism, and later rises against it. When the novel begins, Celeste is eleven years old, and a resident of Butterfly Hill, in the city of Valparaiso. Celeste lives with her family. Her parents are well-known doctors who tend to the poor. Her grandmother, Abuela Frida, survived the Nazis. Delfina, a woman originally hired by Frida to do housework years before, has become family.

Celeste has three very good friends who attend school with her, including Cristobal, Lucila, Marison, and Gloria. They spend their days traveling the city and hanging out at Café Iris. Despite enjoying life, Celeste is also very serious. The amount of poverty in the city hits her deeply and breaks her heart. She is glad to learn of the election of President Alarcon, a man who has promised to combat poverty and make life better for those most vulnerable.

However, many Chileans—including much of the military—believes Alarcon’s changes are dangerous or too fast. Alarcon is overthrown, and all of those who supported him, including Celeste’s parents, are targeted. Thousands go into hiding, or are arrested, imprisoned, and/or executed by the new government under a man known only as the Dictator General. Celeste is terrified as even her own friends, such as Gloria, turn against her, or when friends such as Lucila go missing. Celeste is further heartbroken when her parents decide to go into hiding themselves.

Celeste remains behind with Abuela Frida and Delfina. Eventually, Celeste stops going to school because it is too sad for her. The school is now under military guard, and most of Celeste’s class is missing. Frida and Delfina come to decide that it is simply too dangerous for Celeste to remain in Valparaiso, for as the daughter of two fugitives, Celeste herself may be targeted by the government and supporters of the General. Celeste is sent to live with her Aunt Graciela in Juliette Cove, Maine, in the United States of America.

Juliette Cove is a strange and unusual place at first. Celeste arrives in the winter, and everything is gray. She knows very little English, so she feels out of place. Most of the kids at school make fun of Celeste for being foreign. Nevertheless, Celeste becomes good friends with a girl named Kim, whose family has fled political difficulties in Korea. Together, Celeste and Kim learn better English and learn about one another’s homelands. At school, their teacher Miss Rose has the girls teach the class about their homelands.

As the year goes on, the American kids soften and become friendly toward Celeste and Kim. Celeste develops a crush on Kim’s older brother, Tom. When Kim and her family simply pick up and leave one day, Celeste is devastated. However, it is the American kids—including Meg, Valerie, and Charlie—who are there for Celeste, becoming good friends with her over the next year. During that time, Celeste learns that the General has been killed and Chile will be returning to democracy. She decides it is time to head back to Chile.

Back in Chile, Celeste is thrilled to see her grandmother and Delfina, as well as Cristobal and Marisol. Cristobal even helps Celeste to track down her father, who has been hiding on an old whaling ship off the country’s coast. Celeste’s mother later comes home on her own. New elections are held in which Monica Espinoza is elected. She promises to help heal the country and invites the youth of Chile to write about their dreams for Chile’s future.

Celeste writes in, talking about how she wishes all Chileans could read and write, making communication better. Celeste wins first place, including a full scholarship to college. Celeste requests to use some of the money on a traveling library, and the president agrees. A party is held in Celeste’s honor on Butterfly Hill. She dances with Cristobal, and later writes a letter of hope and love to Kim and Tom.

More summaries and resources for teaching or studying I Lived on Butterfly Hill.

I Lived on Butterfly Hill from BookRags. (c)2022 BookRags, Inc. All rights reserved.