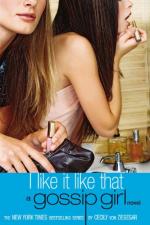 Plot Summary
+Chapters Summary and Analysis
Pages 1 through 42
Pages 43 to 84
Pages 85 through 125
Pages 126 to 164
Pages 165 to 202
Characters
Objects/Places
Themes
Style
Quotes
Topics for Discussion
Order our I Like It Like That: A Gossip Girl Novel Study Guide

Cecily Von Ziegesar
This Study Guide consists of approximately 38 pages of chapter summaries, quotes, character analysis, themes, and more - everything you need to sharpen your knowledge of I Like It Like That.

I Like It Like That: A Gossip Girl Novel Summary & Study Guide includes comprehensive information and analysis to help you understand the book. This study guide contains the following sections:

This detailed literature summary also contains Topics for Discussion on I Like It Like That: A Gossip Girl Novel by Cecily Von Ziegesar.

"I Like It Like That, A Gossip Girl Novel" by Cecily von Ziegesar is a book in the series of books about the Gossip Girl and her friends. Gossip Girl is an unidentified member of a circle of wealthy and privileged teenagers who live in Manhattan, New York. Gossip Girl has a blog on the Internet where she posts messages to her friends and readers. In this story, Gossip Girl talks about the latest subject that is on everyone's mind. The high school seniors in the crowd are all worried about where they will be going to college and more importantly, if the colleges of their choice will accept them. Everyone is making the dreaded visits to the mail box to see if "that" letter has arrived yet. Gossip Girl sympathizes with everyone and tries to bolster their moods.

Of course, until that letter comes they have plenty of distractions to keep their mind off taking that first step toward adulthood. There's shopping for the latest couture creation, there are the parties and doting parents to take up their time but most of exciting of all, it's Spring Break and everyone is heading for a fabulous week away from the usual grind of the life of a spoiled teen in Manhattan. Gossip Girl has a Q&A on her blog. Users ask for her sage advice and she offers up her wisdom on a variety of subjects. The juiciest part of her blog is her "Sightings" section in which she posts the latest movements of her circle of friends, identifying them by first initial only.

Blair Waldorf is not happy with her home life. She doesn't like her step-father. The fact that her fifty-year-old mother is seven months pregnant and has redecorated Blair's room for the little sister who will soon be arriving is just too much! Blair is also not happy at all that the family plans to spend Spring Break in Hawaii on the North Shore so her brother and step-brother can surf.

Serena van der Woodsen is waiting on the steps of the Metropolitan Art Museum for her friend Blair who walk always walk to their exclusive private school together. Serena is depressed. Her boyfriend just broke up with her and she isn't happy with the latest image of herself in a perfume ad that just passed by on a bus. Serena is rich and a supermodel but is feeling unloved. Of course, most boys who have ever seen her fall in love with her immediately but she wants someone she can love.

After Blair tells Serena her tale of woe, Serena invites Blair to move in with her and go on spring break with her to Sun Valley to ski and party. Blair enthusiastically accepts the invitation. When they get to school, the glamorous Serena and the stylish Blair evoke all kinds of jealous comments from the other girls. But Blair and Serena are too wrapped up in themselves to care. After school, Blair moves in and encounters Erik, Serena's older brother who's been away at school for an extended period. She is at once attracted to Erik and thinks he may have been her dream man all along. She used to be hung up on Nate Archibald but that's all over.

Heartthrob Nate Archibald is practicing with his Lacrosse team in central park but the coach won't make Nate team captain because of a little problem Nate had with pot and the cops. He had to go to rehab where he met his current girlfriend of a few weeks, Georgie, who has severe addiction problems.

As it turns out, all the main characters wind up at Sun Valley. Georgie and and another boy get a little too drunk and get arrested. Blair gets cozier with Erik and the entire Dutch snowboarding team is fascinated with Serena. Some of the kids in this circle of kids remain in Manhattan and have their own unique adventures, which are mostly centered around fun and romance. Gossip Girl chronicles every move made by the kids during Spring Break.

Although she promises to reveal her identity to the boys in the circle, Gossip Girl goes back on her word and remains anonymous. It still remains undecided as to what schools each of the characters will be attending. But the most important things to the young people - love and romance - are settled at least in the short term by the story's end.

More summaries and resources for teaching or studying I Like It Like That: A Gossip Girl Novel.

I Like It Like That: A Gossip Girl Novel from BookRags. (c)2022 BookRags, Inc. All rights reserved.