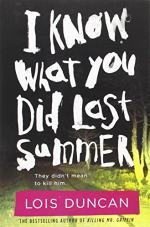 I Know What You Did Last Summer Summary & Study Guide

Lois Duncan
This Study Guide consists of approximately 35 pages of chapter summaries, quotes, character analysis, themes, and more - everything you need to sharpen your knowledge of I Know What You Did Last Summer.

I Know What You Did Last Summer Summary & Study Guide Description

I Know What You Did Last Summer Summary & Study Guide includes comprehensive information and analysis to help you understand the book. This study guide contains the following sections:

This detailed literature summary also contains Topics for Discussion on I Know What You Did Last Summer by Lois Duncan.

The mysterious clues come in a year after the accident. Julie gets a nondescript letter in the mail with only seven words on it that says, "I know what you did last summer." Then Helen finds a picture of a boy on a bike ripped from a magazine advertisement of some sort, taped to her apartment door. A short while later, Ray gets a similarly nondescript envelope in the mail that contains only a newspaper article about the accident. Finally, Barry gets a phone call to meet someone at the football field amid the firework celebration and gets shot.

After each contact from the unknown person, Julie, Helen, Ray, and Barry talk to each other about who could be leaving these messages and what they all mean. Eventually, the details of what happened last summer come out. Barry was driving recklessly on a winding road with Helen next to him in the front seat. Ray and Julie were in the back seat making out. Coming around a corner too fast, Barry didn't see the boy, David Gregg, on the bike until it was too late and he was hit.

Instead of stopping the car and helping, Barry continued down the road to a phone where they stopped so Ray could call the police. They decide that there is nothing they can do for the boy so they do not go back to him. Since Barry is afraid the police will be very hard on him for driving recklessly and hurting someone, he forces them to make a pact never to tell what happened. Helen agrees quickly, but Julie and Ray take a little more convincing. Eventually, however they also agree not to tell.

After they learn that the boy they hit died from the injuries, Julie feels guilty and sends yellow roses to the funeral, and they try to go about their lives. Ray has to get away and moves to California and Julie drops out of all her extra activities and sticks to her studies. Helen seems to have the life of luxury and Barry is having a great time going to college, until the mysterious clues start coming in.

While they wonder who could have found out about them and what it would ultimately mean, Julie and Ray continually revisit the events and their feelings of guilt. Ray even goes so far as to tell Barry he wants to break the pact. Barry refuses to allow it. They go to the Gregg house to see if they can learn anything there. They learn that they wrecked a whole family and not just one little boy.

Helen meets a new fellow who has just moved into her apartment complex, but with her selfish ways, doesn't get to know much about him- her new friend.

Julie's feelings for Ray are revitalized and she feels bored with Bud her new boyfriend. She is looking forward to moving away and putting all this behind her.

Barry gets a phone call one evening. He goes out to meet someone and ends up in the hospital with a gunshot wound. He tells everyone it was Helen who called, that she just wanted to meet him, and that the gunshot was a fluke. He says that he was getting robbed. Finally, he tells Ray that it wasn't Helen who called but some other girl and he only said it was Helen so as to upset his mother.

It is only after he realizes that he will be able to walk again that he has a change of heart and tries to warn Helen that the guy who shot him, did not want to rob him, but was the person who knew what they had done last summer. But it's too late. Helen isn't in the apartment to answer the phone. When she gets inside, she finds Collie in her apartment who tells he that he is the brother of the boy they killed and he is going to kill his date that night. He is also going to kill her.

Helen dashes into the bathroom and is saved from him by breaking a window and climbing out.

Bud shows up for his date with Julie but her mother has had one of her ominous premonitions and asks her not to go. Julie agrees but walks with him out of the car to say good-bye. While outside, Bud tries to get Julie in the car, but she refuses. She will be no match for him, and he strangles her until she passes out. Ray shows up having figured out who Bud is by the yellow paint on his hand and knocks him out with a flashlight. The police show up having received a call from Helen who told them what had happened and that she thought he would be going to Julie's house and Ray and Julie agree they are ready to tell the police what actually happened last summer.

More summaries and resources for teaching or studying I Know What You Did Last Summer.

I Know What You Did Last Summer from BookRags. (c)2022 BookRags, Inc. All rights reserved.