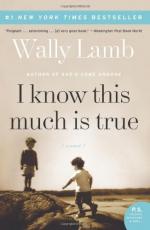 I Know This Much Is True - Chapters 1-4 Summary & Analysis

Wally Lamb
This Study Guide consists of approximately 127 pages of chapter summaries, quotes, character analysis, themes, and more - everything you need to sharpen your knowledge of I Know This Much Is True.

On 12 October 1990, in the Three Rivers Public Library, Thomas Birdsey amputates his right hand to end Operation Desert Shield. The day before, his identical twin, Dominick, impatient at his ranting about Armageddon, misses the sign. Emergency personnel transport Thomas and his hand to the hospital, where he vehemently refuses reattachment.

In Chapter 2 Dominick recalls 1958, when their television explodes and Ma rescues her photo album. In 1987, suffering terminal cancer, she shares with Dominick old news clippings and talks about her immigrant "Papa" whose life story in Italian she has never read. Dominick resolves to get it translated for her, but graduate student Nedra Frank vanishes with the manuscript. Ma dies on 1 May 1987.

Chapter 3 shows Thomas being transported to Three Rivers for observation, wondering why their stepfather Ray has not visited. Dominick, silent, recalls the history of Thomas' treatment and Ray's refusal to...

More summaries and resources for teaching or studying I Know This Much Is True.

I Know This Much Is True from BookRags. (c)2023 BookRags, Inc. All rights reserved.