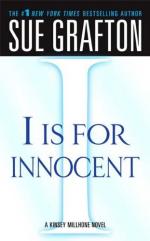 'I' Is for Innocent Summary & Study Guide

Sue Grafton
This Study Guide consists of approximately 28 pages of chapter summaries, quotes, character analysis, themes, and more - everything you need to sharpen your knowledge of 'I' Is for Innocent.

'I' Is for Innocent Summary & Study Guide Description

'I' Is for Innocent Summary & Study Guide includes comprehensive information and analysis to help you understand the book. This study guide contains the following sections:

This detailed literature summary also contains Topics for Discussion on 'I' Is for Innocent by Sue Grafton.

I is for Innocent is the ninth novel in the Kinsey Millhone series by Sue Grafton. In this novel, Kinsey has just been fired from her long time association with California Fidelity Insurance and taken office space with Lonnie Kingman's law firm. Her first major case after this upheaval is for Kingman, a case that involves the wrongful death suit brought by Kenneth Voigt against the man accused of killing his ex-wife, Isabelle Barney. As Kinsey investigates this case, she not only stumbles across another crime that has remained unsolved for six years, but she begins to doubt the guilt of Isabelle's accused killer, David Barney. I is for Innocent is a fast-paced and intricately plotted novel that is in the style that has kept Grafton's readers always coming back for more.

Kinsey Millhone has just moved her offices from California Fidelity Insurance to the offices of Lonnie Kingman's law firm because of a disagreement with the new efficiency expert. Kinsey has been surviving by serving subpoenas, therefore she is pleased when Kingman calls her into his office and asks her to take on a case involving the wrongful death suit Kingman is bringing on behalf of his client Kenneth Voigt. The case involves the murder of Isabelle Barney, Voigt's ex-wife, who was shot through the peep hole in her front door the day after Christmas six years ago. Isabelle's third husband, David Barney, was charged with the murder, but acquitted at trial. The case is set to go to trial in a month, but the private investigator working on the case passed away. Kinsey is to take his files, complete the interviews, and serve the remaining subpoenas.

Kinsey begins the case by reviewing the paperwork taken from the previous investigator, Morley Shine. Kinsey finds the paperwork disorganized with multiple files missing. Kinsey decides to visit Morley's widow to gather any other paperwork he might have left in his office. Kinsey learns that Morley's wife has cancer and Morley spent a great deal of his time working from home in the past year. With the permission of Morley's sister-in-law, Kinsey searches the home office and then gets the keys to Morley's office behind a beauty salon in town. At the beauty salon, Kinsey speaks with the owner of the shop and allowed to search the office, but she finds little except more disorder and evidence of Morley's poor health habits.

Kinsey begins her investigation into Isabelle Barney's death by visiting the plantiff's star witness, Curtis McIntyre. McIntyre swears that David Barney confessed to him that he killed Isabelle as he left he courthouse after his acquittal. From there, Kinsey speaks to Isabelle's sister, Simone, who still lives behind the house where Isabelle died. Simone talks about Isabelle's difficult relationship with her third husband as well as her business designing tiny houses. Simone seems to support the prosecution theory that David had many reasons to kill his wife, the least of which was the large amount of money he would inherit. After Simon, Kinsey interviews Rhe Parsons, Isabelle's best friend. Rhe tells Kinsey how Isabelle might have been narcissistic, but she was a good friend to Rhe's teenage daughter who was struggling with a drinking problem at the time.

Kinsey also interviews Isabelle's employer, a well known architect, and his wife, as well as the wife of Kenneth Voigt who was a witness to some of the drama that often took place between Isabelle and her husband, David. Through all this, Kinsey became aware that Morley Shine did not interview all the people he claimed to have and that he never served subpoenas that he charged Lonnie for. At the same time, Kinsey receives a call from David Barney, giving her reason to doubt the testimony of Curtis McIntyre, an ex-con who claims David confessed to the crime after his acquittal. Kinsey interviews McIntyre again, only to have him change his story. Now Kinsey has strong reason to believe McIntyre is lying.

Kinsey returns to her office to review more of the paperwork before going to interview Laura Barney, David Barney's first wife. As Kinsey is leaving, she has trouble starting her new, used VW Bug. David Barney surprises her, insisting that he needs to speak with her. Barney claims that not only did he not confess to McIntyre, but he has witnesses who can place him several miles from the crime scene at about the time the coroner believes Isabelle died. Barney gives Kinsey the name of the witness, as well as the description of a truck he claims he saw Tippy Parsons, Rhe's daughter, driving that night.

Unable to ignore Barney's claims, Kinsey interviews his witness. The man, a worker for the city's water department, backs up Barney's story. Kinsey then calls Rhe and asks her about Tippy's whereabouts the night of Isabelle's death. Rhe becomes defensive, insisting that Kinsey back off of her daughter. This bothers Kinsey until she recalls that a man was hit by a vehicle that night. Kinsey speaks with a witness and learns that the man was hit by a white truck with a blue logo, making Kinsey wonder if Tippy, who she knows was struggling with alcohol addiction at the time, might have been driving drunk that night.

Kinsey returns to her office to retrieve her camera so that she might create a lineup of trucks for the witness. Before she has a chance to take pictures, however, Kinsey gets a call from Shine's sister-in-law requesting the return of his keys. At Shine's house, Kinsey searches his car for anymore files pertaining to the case and finds a receipt for a photo development shop. At the shop, Kinsey pays for the prints and discovers that Shine took pictures of white trucks just as Kinsey was planning to do. Kinsey shows the pictures to the witness who quickly identifies the truck belonging to Tippy's father. Kinsey visits Tippy and warns her to go to the police before Kinsey goes herself with this evidence.

Kinsey begins to wonder if Morley's death is coincidental or if someone wanted him out of the way. Kinsey talks to the widow and suggests an autopsy. As part of the autopsy, Kinsey gathers chemicals and leftover food from Morley house and office for the coroner to use to look for possible poisons. After the funeral, the coroner's offices autopsies Morley's body and informs Kinsey that it appears he was poisoned by a mushroom laced strudel.

Kinsey returns to the files Morley Shine created on the case and begins playing with the facts, trying to put them in some kind of comprehensible order. Kinsey finds a notation on a calendar suggesting Morley spoke with Kenneth Voigt's wife, but she denied ever speaking to him. Kinsey visits Mrs. Voigt again and learns she spoke to Morley on the phone after discovering her husband was giving money to McIntyre. Kinsey attempts to interview both Voigt and McIntyre about that, but finds both of them unavailable. Instead, Kinsey breaks into McIntyre's hotel room and discovers he was also receiving payments from the wife of Isabelle's boss, the architect.

Kinsey visits the home of the architect, looking for the mushrooms she has since learned are responsible for Morley's death. The wife surprises her on the property. Kinsey tells her about the money she found in McIntyre's room and learns that McIntyre is her grandson, suggesting a connection between McIntyre and Voigt that could have led to McIntyre's false testimony. Kinsey returned home once more, still running the case through her head, bothered by a missing segment of time between Tippy hitting the man downtown and arriving at the intersection where she nearly hit David Barney. Kinsey speaks with Tippy and learns that she stopped at Isabelle's house after the accident to ask for advice. However, when Tippy arrived, no one answered the door and so she leaves.

Immediately after talking to Tippy, Kinsey receives a call from Curtis McIntyre. McIntyre wants to meet Kinsey at the bird refuge. Kinsey calls for backup from an ex-lover who is a cop and then drives to her office to get her gun. However, someone is there waiting for her. The lights go out and someone fires. Kinsey crawls through the office and stumbles on Curtis McIntyre's body. As Kinsey backs away, looking for a hiding place, she realizes who the gunman is. Kinsey calls out to David Barney, telling him she knows that he killed his wife. Kinsey has realized that David Barney saw Tippy pull up to the house, so he jumped into the back of her pickup truck and jumped out at the intersection where the water workers saw him. David confirms this.

Kinsey speaks to David Barney as she looks for a place to hide, not only getting him to confess to all his crimes, but keeping him distracted. Finally Kinsey hides in the copy room and waits for Barney to come after her. When Barney enters to room, Kinsey fires twice, killing him.

More summaries and resources for teaching or studying 'I' Is for Innocent.

'I' Is for Innocent from BookRags. (c)2022 BookRags, Inc. All rights reserved.