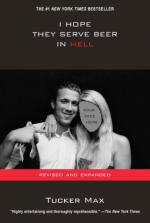 I Hope They Serve Beer in Hell Summary & Study Guide

Tucker Max
This Study Guide consists of approximately 13 pages of chapter summaries, quotes, character analysis, themes, and more - everything you need to sharpen your knowledge of I Hope They Serve Beer in Hell.

I Hope They Serve Beer in Hell Summary & Study Guide includes comprehensive information and analysis to help you understand the book. This study guide contains the following sections:

This detailed literature summary also contains Topics for Discussion on I Hope They Serve Beer in Hell by Tucker Max.

The book I Hope They Serve Beer in Hell is a confessional. It is the story of a young man's debauchery. While it fits well into one package as a whole book, it is actually made up of short stories. Morality is rarely overtly discussed in the book. However, as evidenced by the title and in moments during individual stories when the author has written comments such as "I am a bad person," and at numerous other times, the title is supported by the tenor of condemnation or at least of an emerging awareness that there is something "wrong" with this type of behavior.

This book serves "Generation Y" as it relays stories of a man in his twenties. The first stories occurred back in 1999, and the book ends with a story as recent as 2005. The length of these tales vary. Some are very brief, running a few short pages. Others are far longer, making it to nearly 30 pages.

There is a sense in which this book chronicles the pain and sorrow of a young man whose life, while in certain respects is in good order, in other ways has careened out of control. Readers will only be able to read of the author getting sick from excessive drunkenness so many times in the story before sensing that something is terribly wrong. Readers may wonder why this keeps happening? Does he need help? In this sense, it can serve as a warning for parents of growing children. What can you do so that your sons and daughters don't go the way of Tucker Max?

The messages are mixed. The author's book is successful and Tucker is also excellent at writing, telling stories, picking up women and the like. This makes it seem as though all this is good. However, someone puking into shrubbery from excessive alcohol consumption is rather acutely sad, no matter who it is. The extent of humiliation that the author has endured through the experiences he described in the book is extreme.

The stories also support the title, when, during stories, readers learn that one of the author's best talents is to mock others. He is a master of verbal cruelty. This unpleasant quality is strongly supported by some of his male friends. There is one story in the book when these friends intensely desire the entertainment of Tucker getting drunk and verbally assaulting everyone who comes within range.

Tucker's cruelty, his wanton promiscuity combined with a tendency to harsh judgments against the very women he most likes to have sex with; his struggles with raw greed and whatever it is that makes him repeatedly get too drunk, are the essence of how and why he is planning to be found in Hell if he has any forthcoming "Afterlife."

The book can be taken in a variety of ways. People can feel united in their naughtiness. They might otherwise feel righteously superior because their own behavior is so much better. Readers can live "vicariously" through Max's behavior. Others may feel "exorcised" of their own dark moments by seeing that "it isn't just themselves."

As it happens, the book is also a testament the contemporary art of the short story. As a literary act, the author succeeded in taking the oral tradition of swapping real life stories with others and putting it effectively into the written word. In that sense, this is a triumphant work of today's literature. It simultaneously confirms and shows how true-life stories are traded as part of American culture while immortalizing these stories into a book so that it can live on within the published world long after the moment in which it was shared. In this sense Tucker has effectively used the book format in much the same way that people use photographs to capture fleeting moments...To preserve them, at least partially, indefinitely.

More summaries and resources for teaching or studying I Hope They Serve Beer in Hell.

I Hope They Serve Beer in Hell from BookRags. (c)2022 BookRags, Inc. All rights reserved.