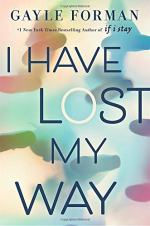 Related Topics
If I Stay

I Have Lost My Way Summary & Study Guide

Gayle Forman
This Study Guide consists of approximately 59 pages of chapter summaries, quotes, character analysis, themes, and more - everything you need to sharpen your knowledge of I Have Lost My Way.

I Have Lost My Way Summary & Study Guide Description

I Have Lost My Way Summary & Study Guide includes comprehensive information and analysis to help you understand the book. This study guide contains the following sections:

This detailed literature summary also contains Quotes and a Free Quiz on I Have Lost My Way by Gayle Forman.

The following version of the book was used to create this study guide: Forman, Gayle. I Have Lost my Way. Random House, New York, New York, 2018. Kindle AZW file.

Freya is a budding music star who has just left a doctor's appointment with disappointing results. She knows her manager is about to drop her. Her career is ending because she can no longer sing without her voice cracking. Harun is a Muslim who cherishes the support of his family but believes they will turn their backs if they discover he is gay. He is supposed to be leaving the following day for Pakistan to choose a wife. However, he is considering running away instead of going to Pakistan. Nathaniel lived in Oregon with his mentally unstable father until his father died. Nathaniel believes he has become so isolated that he is now all alone in the world. Rather than facing that, Nathaniel plans to kill himself so he can rejoin his father.

Freya is standing on a low bridge in the park, distracted by her phone, when passersby cause her to lose her balance. She falls directly on Nathaniel and knocks him out. Freya calls on Harun, who witnessed the event, to help her see to Nathaniel. All three are in the park when this incredibly random event causes them to unite, first in reacting to the situation and then because they recognize the potential for a strong friendship.

When she falls, Freya is looking at her phone because she discovered her sister Sabrina has just become engaged. Freya and Sabrina have not spoken in two years. Their father Solomon Kebede left the family when Freya was young, returning to his native Ethiopia. Freya and Sabrina had never been close, but Sabrina stepped in to comfort Freya. Her gesture created a new relationship between the two. When Freya and Sabrina begin singing together and posting their songs online, Mrs. Kebede sees an opportunity and takes over their budding music careers. Soon, Sabrina and Mrs. Kabede are spending all their time working on the business side of the endeavor while Freya is consumed with interacting with her fans, mostly on social media. When Hayden Booth, a manager known for launching music careers, called them for interviews, he told Sabrina he was only interested in Freya. Feeling betrayed, Sabrina cut ties with Freya as Freya's career was taking off.

Harun has grown up in a traditional Muslim home with extended family as an integral part of his life. When he was twelve, he realized he was gay. Carefully, he hid that from his family. When he began college, he met James, a young gay man whose father kicked him out of the house after he came out. James and Harun were a couple for a year and a half and knew all about each other, including James' fascination with the budding star Freya. James realized Harun was never going to openly acknowledge this fundamental part of his nature to his family or publicly proclaim their relationship. So, he broke up with Harun. Harun told a cousin Amir of his love for James, and Amir pledged to help. Rather than helping Harun find a way to break the news to his family, Amir set the stage for Harun to travel to Pakistan to find a bride. Harun, faced with this situation, decided to go rather than face the possibility that his family would completely cut ties.

Nathaniel's father was mentally unstable and took on the role of friend and playmate to Nathaniel rather than father. Nathaniel's mother left, agreeing Nathaniel could remain only because his grandmother took over as caregiver for both Nathaniel and his father. His grandmother died and Nathaniel took over the role as the adult in the family. When Nathaniel lost an eye and the opportunity to play baseball, he found himself increasingly isolated with only his father for company. His father died at home and Nathaniel was skeptical of the ruling that it was an “accidental overdose.” For the next two weeks, Nathaniel remained at home alone, with not one person checking in on him. Completely isolated at that point, he decided to travel to New York City, one of the places he and his father had dreamed of visiting someday, and to commit suicide there.

After Freya falls on Nathaniel, her first concern is that someone (perhaps Harun) had videoed the accident and that she would be slammed on social media. She recruits Harun to take Nathaniel to a nearby clinic to be sure Nathaniel is alright. They might have gone their separate ways after that, but each is desperate to hold onto this connection, which grows into devoted friendship over the course of a few hours. By the end of the day, Harun calls on them to help him reveal his sexual orientation to his family, though it does not go exactly as Harun planned. Freya reunites with her sister, though she still cannot sing. Nathaniel goes to the bridge where he planned to commit suicide, but he finds a glimmer of hope based on the time he spent with Nathaniel and Freya. He does not jump. The three reconnect at the end of the day, certain this friendship will see them through the tough times ahead.

More summaries and resources for teaching or studying I Have Lost My Way.

I Have Lost My Way from BookRags. (c)2022 BookRags, Inc. All rights reserved.