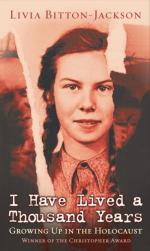 I Have Lived a Thousand Years: Growing Up in the Holocaust Summary & Study Guide

Livia Bitton-Jackson
This Study Guide consists of approximately 25 pages of chapter summaries, quotes, character analysis, themes, and more - everything you need to sharpen your knowledge of I Have Lived a Thousand Years.

I Have Lived a Thousand Years: Growing Up in the Holocaust Summary & Study Guide Description

I Have Lived a Thousand Years: Growing Up in the Holocaust Summary & Study Guide includes comprehensive information and analysis to help you understand the book. This study guide contains the following sections:

This detailed literature summary also contains Topics for Discussion and a Free Quiz on I Have Lived a Thousand Years: Growing Up in the Holocaust by Livia Bitton-Jackson.

The story begins the town of Somorja in the summer of 1943 when Elli, twelve, longs for the exciting life led by her older brother, Bubi. Elli spends her days in the typical pursuits of young girls of her age. Her friend Bonnie and she sometimes go to the Danube to swim, as do many others in the area. The river also serves as a place for watering herds of animals, such as sheep.

Elli lives with her parents at a time when Germans are threatening people of every ethnicity other than the Aryan race. Elli and her family, Jews, are soon targeted. Forced to wear the bright yellow star on their clothing at all times, Elli simply refused at first to go out, though Bubi wears the star like a badge of honor. When Elli attends a final school function - the school having been closed due to the impending war - she encounters a classmate who notes the star on her coat. Elli notes the sadness in his eyes as he looks at the emblem and it seems that he already knows that those of Elli's fate will be facing hardships in the days to come.

Soon Elli, her family and all Jews of their town are forced to turn over all their valuable possessions. Ignoring the edict, Elli's father buries some jewels, making certain that each family member knows their location. In his words, it's impossible to know which of the family will return from the next dictate - that all Jews will be moved to a "ghetto" seventeen kilometers away. Though quarters are cramped and there is inadequate space and no privacy, the Jewish families find a peaceful co-existence. As the families are running out of food, the able-bodied men are sent to a labor camp. The remaining Jews are soon forced to walk a great distance and are then shipped by train to Auschwitz.

At Auschwitz, Elli and Laura are spared the gas chamber by a fluke of fate when a Nazi leader notes Elli's light-colored hair. Though all children her age are being summarily executed, the soldier tells Elli that she is forever after to say her age is sixteen. Once in the camp, Laura and Elli encounter cousins and then Elli's aunt. From these, they learn some basic rules of survival. Soon Laura and Elli are transported to another labor camp and later to a factory where they help in the manufacture of German airplane equipment. Laura is severely injured but Elli refuses to allow her mother to give up on life.

Finally, Laura and Elli reconnect with Bubi, though they hardly recognize him. When the Allied soldiers near, the family and thousands of other prisoners endure a grueling train ride that ends when the Americans take the SS guards as their prisoners. Only when they reach home do Elli and her family discover that her father is among the casualties of the prison camps. When an uncle learns of their survival, the family begins making plans to travel to New York. As Elli and her mother stand on the deck of a ship, they get their first glimpse of the Statue of Liberty, the symbol of the country Elli and her family will now call home.

More summaries and resources for teaching or studying I Have Lived a Thousand Years: Growing Up in the Holocaust.

I Have Lived a Thousand Years: Growing Up in the Holocaust from BookRags. (c)2022 BookRags, Inc. All rights reserved.