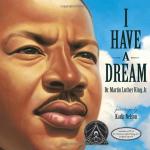 I Have a Dream Essay

Martin Luther King, Jr.
This Study Guide consists of approximately 25 pages of chapter summaries, quotes, character analysis, themes, and more - everything you need to sharpen your knowledge of I Have a Dream.

In the following excerpt, Wortham argues that King's appeal to the masses in his "I Have a Dream" speech rather than the individual was a critical mistake that negatively impacted future generations of black Americans.

Annually, throughout the month of February, known as Black History Month, Martin Luther King Jr.'s voice punctuates the airwaves like a public-service announcement, delivering his "I Have a Dream" speech at the 1963 March for Jobs and Freedom in Washington, D.C.

What listeners usually hear is the speech's rousing "Let freedom ring!" finale, which begins with King's invocation of the patriotic hymn "America" and ends with the vision of

the day when all God's children—black men and white men, Jews and Gentiles, Protestants and Catholics—will be able to join hands and sing in the words of the old Negro spiritual, "Free at last! Free at last! Thank God Almighty...

More summaries and resources for teaching or studying I Have a Dream.

I Have a Dream from BookRags. (c)2022 BookRags, Inc. All rights reserved.