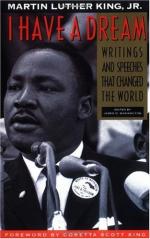 I Have a Dream: Writings and Speeches That Changed the World Setting & Symbolism

Martin Luther King, Jr.
This Study Guide consists of approximately 27 pages of chapter summaries, quotes, character analysis, themes, and more - everything you need to sharpen your knowledge of I Have a Dream.

The Southern Christian Leadership Conference or the SCLC, is formed at the Ebenezer Baptist Church in Atlanta and Dr. King is elected the president of the organization.

The company whose bus driver asked Mrs. Rosa Parks to give her seat up to a white person. The Montgomery Bus Company was looked at as the first step in the civil rights protesting. Montgomery buses are integrated a year and fifteen days after the strike began.

Stride Toward Freedom: The Montgomery Story

The book that Dr. Martin Luther King Jr. wrote depicting the bus boycott. While signing autographs for his book in Harlem, Dr. King is stabbed by Mrs. Izola Curry.

More summaries and resources for teaching or studying I Have a Dream: Writings and Speeches That Changed the World.

I Have a Dream: Writings and Speeches That Changed the World from BookRags. (c)2023 BookRags, Inc. All rights reserved.