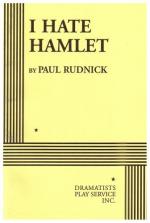 Books Like I Hate Hamlet by Paul Rudnick | Suggested Reading

Paul Rudnick
This Study Guide consists of approximately 31 pages of chapter summaries, quotes, character analysis, themes, and more - everything you need to sharpen your knowledge of I Hate Hamlet.

Audiences who watch I Hate Hamlet without being familiar with William Shakespeare's play Hamlet will not be able to fully appreciate the humor, nor the depth of the characters' emotions about Shakespeare's tortured character. Written some time around 1600, Hamlet is considered by many to be the author's greatest work.

Paul Rudnick's first novel, Social Disease, was published in 1986 and has recently been reissued by St. Martin's Press. It is a humorous commentary on life in Manhattan in the 1980s.

After I Hate Hamlet, Rudnick's most famous work for the theater is his play Jeffrey (1993). Like the earlier play, Rudnick infuses a serious situationin this case, a gay man coming to grips with the devastation that AIDS is causing around himwith humor.

Jason Miller, a Pulitzer Prize—winning playwright (for That Championship Season) and actor (he had one...

More summaries and resources for teaching or studying I Hate Hamlet.

I Hate Hamlet from Gale. ©2005-2006 Thomson Gale, a part of the Thomson Corporation. All rights reserved.