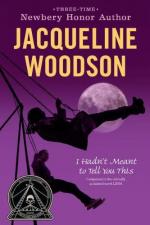 I Hadn't Meant to Tell You This Summary & Study Guide

I Hadn't Meant to Tell You This Summary & Study Guide Description

I Hadn't Meant to Tell You This Summary & Study Guide includes comprehensive information and analysis to help you understand the book. This study guide contains the following sections:

This detailed literature summary also contains Topics for Discussion on I Hadn't Meant to Tell You This by Jacqueline Woodson.

"I Hadn't Meant to Tell You This" by Jacqueline Woodson is the story of twelve-year-old Marie, a black girl who lives in Chauncey, Ohio, with her father who is a college professor. Chauncey, Ohio, had been a mining community until the mines dried up. After that, the miners - many of whom were poor and white - moved to Athens to work in the factories there. But the factories began to shut down and many of the families who had once worked in the mines in Chauncey returned. Many of these returning families built shacks along the Hocking River which was known to rise and flood the lowlands.

Marie is best friends with the most popular girl in school who is named Sherry. Marie emulated Sherry's style - her clothing and hair-dos - and both were considered the best-dressed students in their class. There were not many white kids at school and those who were there were poor - often called poor white trash by some of the black students. When a new poor white girl showed up at school and was introduced to the class, Marie hoped that the girl wouldn't be seated anywhere near her. The girl looked dirty, was wearing worn clothes and had oily hair. But Ms. Cory, the classroom teacher, selected Marie to show the new girl, Lena, around.

Marie, of course, was not thrilled with the task but took on the responsibility of familiarizing Lena with the school. Sherry made comments about Lena being white trash and that Marie was being an Uncle Tom for spending time with her. Almost immediately, Marie saw something different in Lena - different in a good way. Marie was drawn to the girl even though she tried to resist forming a friendship with her. Lena was direct about her wish for them to be friends and they became very close friends with a good deal in common. Eventually, Marie came to see both Lena's strength and her vulnerability and came to admire her new friend whose depth far out-distanced stylish clothes and chic hair-dos.

Marie's mother, Diane, had left the family two years before. Marie missed her mother terribly and suffered from abandonment and guilt. She had to deal with her father who was crushed by his wife's departure and the new family of two that had become their new reality. Marie's father had marched for desegregation and had some serious scrapes with white opponents. It was natural that he had acquired some wariness about white people and was at first against Marie's friendship with Lena. But eventually, he saw that it was a positive relationship and even came to like Lena himself.

But Lena was dealing with very adult problems, problems that a twelve-year-old should never be forced to tackle. She eventually told her best friend, Marie, that her father was sexually abusing her. It had been going on since her mother died several years before. Lena's main concern was not allowing the same thing to happen to her younger sister, Dion. Although Marie encouraged her to go to the authorities, Lena refused knowing that if social services was alerted that she and her sister would be separated and placed in different foster homes.

Through her friendship with Lena, Marie is able to have a deeper understanding of her own mother's actions. The resolution about her mother helps prepare her for Lena's ultimate departure. She realizes that everyone - Lena, her mother and even Marie herself - must find that sweet green silence where peace and happiness awaits them.

I Hadn't Meant to Tell You This from BookRags. (c)2022 BookRags, Inc. All rights reserved.