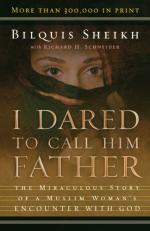 I Dared to Call Him Father Summary & Study Guide

Bilquis Sheikh
This Study Guide consists of approximately 26 pages of chapter summaries, quotes, character analysis, themes, and more - everything you need to sharpen your knowledge of I Dared to Call Him Father.

I Dared to Call Him Father Summary & Study Guide Description

I Dared to Call Him Father Summary & Study Guide includes comprehensive information and analysis to help you understand the book. This study guide contains the following sections:

This detailed literature summary also contains Topics for Discussion and a Free Quiz on I Dared to Call Him Father by Bilquis Sheikh.

I Dared to Call Him Father is the story of Bilquis Sheikh. Written by Bilquis Sheikh it is the story of her journey to Christianity. Bilquis Sheikh is a wealthy, upper-class woman living in a palatial home surrounded by a lush garden in Wah, Pakistan. Bilquis also known as the Begum is a wealthy, respected Muslim woman who is greatly respected and revered by the townspeople. In fact, she is well known throughout her entire country. Bilquis' family has been in what is considered the ruling or higher class for centuries. Bilquis is a practicing Muslim, having been raised in Islam from the time she was four years, four days and four hours old—the traditional moment that Arabic is taught to Muslim children which is essential for the study of Islam.

The story takes place beginning when Bilquis is 46 years of age. At this point in her life, Bilquis has experienced quite an upheaval in her provincial life. Her husband of many years recently left her telling her he did not love her any more. She was crushed by his departure, which sometimes comes out in her haughty attitude to her many servants and the poor townspeople. Bilquis begins to experience several strange incidents that at first frighten her. She later sees that her unusual experiences and strange dreams are ultimately what leads her to a new spiritual beginning as a Christian woman. In one dream she sees herself dining with Jesus Christ. In another dream she meets with a person called John the Baptist. This prophetic dream is stunning since she had never heard the name "John the Baptist" before in her life.

Bilquis is at first reluctant to follow a path that may lead to any faith other than Islam. Since she is a Muslim woman, she knows the dangers that would lay ahead as it is against Islamic laws to convert to another religion or to even learn about one; reading the Bible is also forbidden. None the less, she is drawn to Christianity and is determined to learn what her dreams meant and begins reading the Bible. She also seeks out the advice of The Reverend David Mitchell and his wife, Synnove, with whom she has had casual contact in the past. Synnove prays with Bilquis knowing that the Lord is reaching out to Bilquis.

The Mitchells and other Christian friends, especially Ken and Marie Olds, support her spiritual sojourn. The title of the book stems from her contact with a local doctor. The female doctor is also a Catholic nun who senses her uncertainty and speaks with Bilquis about her faith. She tells Bilquis to not be afraid to call the Lord her Father. Once Bilquis takes this step, committing herself to Jesus, there is no turning back for her. Bilquis pursues her conversion to Christianity despite harrowing and dangerous odds. Learning of her religious conversion, her family boycotts her and will have nothing to do with her.

Bilquis receives threats against her life and property. However, she learns that staying strong in her beliefs is the only way—no matter what the ramifications may be. Bilquis faces additional chaos in her life when a new government is established in Pakistan. The new people's government has plans to reclaim land from large property owners like Bilquis and redistribute it. Bilquis does not panic but relies on the Lord to lead her in the direction he has chosen for her. Bilquis becomes a speaker for outreach groups and ultimately moves to the United States with her grandson, Mahmud. Leaving her home is difficult, but she realizes that the most important thing in her life is her devotion to Christ.

More summaries and resources for teaching or studying I Dared to Call Him Father.

I Dared to Call Him Father from BookRags. (c)2022 BookRags, Inc. All rights reserved.