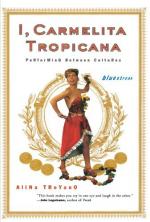 Alina Troyano
This Study Guide consists of approximately 22 pages of chapter summaries, quotes, character analysis, themes, and more - everything you need to sharpen your knowledge of I, Carmelita Tropicana.

This detailed literature summary also contains Topics for Discussion and a Free Quiz on I, Carmelita Tropicana: Performing Between Cultures by Alina Troyano.

In the first play, "Memories of the Revolution," the scenes and characters serve to recount Carmelita's experiences during and after the revolution in Cuba. The play begins in the year 1955, when Carmelita and her cohorts are attempting to assassinate the evil Captain Maldito who tortures citizens he illegally arrests. When they fail at assassinating Maldito, Carmelita and her friends escape to Miami where they begin a new life in America. They are reunited with Maldito years later. He apparently fled from Cuba as well and was working as a janitor when they encountered him in New York City. Carmelita and her friends are heartened when Maldito is reduced to a non-threatening and powerless entity.

In the play, "Milk of Amnesia," Carmelita comes down with a serious case of amnesia and is unable to remember anything about her past in Cuba. She revisits her homeland in hopes of sparking some recollections. By visiting her childhood home, she finally recalls her past. Her memories are bittersweet, however, since she is unsure if her disappointment with her homeland is only because she is seeing it through the lens of America.

In the play, "Chicas 2000," Carmelita presents the difficulty that a Cuban and all Hispanics have in blending into American society. She portrays this struggle by creating an arm of the FBI who issues warrants for people who are not living up to the social expectations of American culture. Carmelita shows her defiance by proclaiming that through its food and music, Hispanic culture is taking a foothold in American society. She declares that Latinos by the year 2000 become the majority minority.

The mistreatment of women is the main thrust of "Sor Juana: The Nightmare." The play depicts the unfair life that a talented writer is expected to live as a nun. The only man in the play, the Prosecutor, represents the culture that has created the inequity between men and women. The Prosecutor punishes her forsaking her sacred vows to God. When Juana declares that God favors men, Juana impresses the Prosecutor with her intellect but he beats her so that she is strengthened in her devotion. In the screenplay, "Carmelita Tropicana: Your Kunst Is Your Waffen." the topics of feminism and racial bias are at the forefront. Sophia, Carmelita's sister, is concerned with losing her Hispanic accent and learning how to become a yuppie. The imprisonment of Carmelita and the other women is a metaphor for the limitations that society places on women.

More summaries and resources for teaching or studying I, Carmelita Tropicana: Performing Between Cultures.