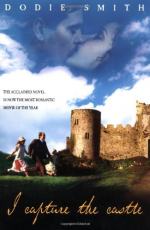 Dodie Smith
This Study Guide consists of approximately 40 pages of chapter summaries, quotes, character analysis, themes, and more - everything you need to sharpen your knowledge of I Capture the Castle.

I Capture the Castle Summary & Study Guide includes comprehensive information and analysis to help you understand the book. This study guide contains the following sections:

This detailed literature summary also contains Quotes and a Free Quiz on I Capture the Castle by Dodie Smith.

"I Capture the Castle" is the story of the Mortmain family living in a castle in 1930s England. The story is revealed through the journal entries of 17-year-old Cassandra Mortmain who writes every day to perfect her writing skills. The story covers six months of time during which the Mortmains emerge from poverty to relative comfort due to changing circumstances.

Cassandra's family consists of her father, James, who had a bestselling book but who refuses to write anymore for reasons that no one else seems to understand. Cassandra's biological mother died several years ago but her father married an artist's model named Topaz who adores her husband and tries to act as his muse. Cassandra has a 19-year-old sister named Rose and a 15-year-old brother named Thomas. The family has also taken as part of their family a boy named Stephen who is the son of their former maid.

The family lives in poverty since Mr. Mortmain refuses to write any more books and they have sold off their valuables including most of their furniture. Stephen works for a local farmer and gives most of his wages to the family which at least provides some food. Rose, especially, suffers from being poor and sets her sights on a young man named Simon Cotton when he, his mother and brother, Neil, return from America to run their Scoatney estate on which the castle stands. The Cottons are intrigued by the genteel Mortmains and become their benefactors, changing their living circumstances.

The Mortmains' situation improves dramatically when Simon becomes engaged to Rose who does not really love him. In time, Cassandra befriends Neil but realizes that it is Simon whom she loves. Cassandra and Thomas trick their father into writing again so the family can take care of itself without help from the Cottons. Rose realizes that it is not right to marry Simon because it is Neil whom she really loves and the two of them run away together to live in America. Simon and Rose are in love, too, and he promises to return for her one day so they, too, can live in America.

More summaries and resources for teaching or studying I Capture the Castle.

I Capture the Castle from BookRags. (c)2022 BookRags, Inc. All rights reserved.