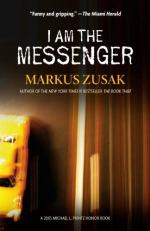 I Am the Messenger Summary & Study Guide

I Am the Messenger Summary & Study Guide Description

I Am the Messenger Summary & Study Guide includes comprehensive information and analysis to help you understand the book. This study guide contains the following sections:

This detailed literature summary also contains Topics for Discussion on I Am the Messenger by Markus Zusak.

"I am the Messenger" by Markus Zusak tells the story of a young man challenged by an unknown benefactor to become a better person by helping those around him. Through a series of assignments given to him on the aces from a deck of playing cards, Ed Kennedy learns to face his fears. He is able to rise above his feelings of incompetence as he helps others in areas where they need the help the most. Some of the messages that Ed receives are as simple as buying an ice cream cone for a struggling single mother while others put Ed in positions of real danger. At the conclusion of the novel, Ed learns that he is not only the messenger, but also the message as the man who sent Ed on his journey of self-improvement tells Ed he has learned that even an ordinary man can live beyond normal expectations.

Ed's journey begins when he becomes involved in a bungled bank robbery and helps police capture the robber by grabbing the robber's dropped gun and shooting at him. When Ed testifies at the trial for the bank robber, the robber threatens Ed, telling him that he is a dead man. A short time prior to this, Ed had received in the mail an Ace of Diamonds with three addresses and times listed on it. Ed becomes aware that he is supposed to help the people who are listed on these addresses. Through the course of the story, Ed works his way through all of the aces as well as the joker card. Those he helps include an elderly lady needing reassurance that she treated her husband right and a family who needs a new string of Christmas light to make their holiday bright. Ed is even called to give messages to his closest friends and family members.

Ed's last message, delivered on the joker card, is for Ed himself. During the delivery of this message, Ed learns that he is not only the messenger, but also the message as he shows the man who put Ed's entire journey into motion that people, even ordinary ones, can rise about their perceived abilities to make a difference in the world. Through his journey, Ed becomes more confident in his abilities and improves as a human being. Even Audrey, who is the love of Ed's life but has never allowed herself to love Ed, recognizes Ed's goodness as she finally gives in to his love. There is also a twist at the conclusion of the novel as Ed learns the identity of the man who has sent him all of the messages.