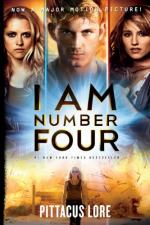 Pittacus Lore
This Study Guide consists of approximately 50 pages of chapter summaries, quotes, character analysis, themes, and more - everything you need to sharpen your knowledge of I Am Number Four.

I Am Number Four Summary & Study Guide includes comprehensive information and analysis to help you understand the book. This study guide contains the following sections:

This detailed literature summary also contains Topics for Discussion and a Free Quiz on I Am Number Four by Pittacus Lore.

I am Number Four by Pittacus Lore is a novel that takes a look at the consequences of alien contact and survival of the human species. Lorien is a planet that is a hundred times older than Earth. It has already faced the myriad of problems with which Earth is only beginning to struggle now - global warming, food shortages, overpopulation, and pollution are all part of Lorien's history. Twenty five thousand years ago, long before they were able to travel through the universe, their planet began to die. The inhabitants of Lorien knew that something drastic had to be done to ensure their survival. They made a commitment to change their way of life, and slowly do away with the harmful chemicals, bombs, pollutants and guns. In time, the damage began to reverse itself, and Lorien survived.

Another planet, Mogadore, faced the same issues, but its inhabitants were less concerned. Instead of making changes to ensure their survival, they continued to use and abuse the planet they called home. They didn't understand that their waste and sewage would kill their rivers and lakes. They failed to comprehend that this would cause the herbivores to perish and that the carnivores would soon follow. Instead, they used their resources up, and then traveled to the next closest life-sustaining planet - Lorien. The battle was fierce and the Lorien citizens fought valiantly, but failed to save their planet from the Mogadorian invasion.

Six children were sent into space with their Cêpans on a year long journey to Earth. Once there, they separated, each protected by a Loric charm. They had to survive until they came into their Legacies and became powerful enough to return to Lorien and reclaim their home. Their Cêpans were tasked with their education and their safety and as long as they remained apart from each other, the Lorien children known as the Garde could only be killed in specific order. As an added safety measure, if the first of the six (called Number One) was killed, a ring would immediately be burned into the ankles of the remaining five. As such, Number Four knew the Mogadorians would come for him next when the third ring formed on his ankle.

Number Four also knew that it meant they would be moving again, as they had every few months since their arrival on Earth ten years earlier. He would have to leave this identity behind, taking on a new name and finding a way to fit into yet another small town. This time, the move was to Paradise, Ohio. Known now as John, he and his Cêpan, Henri, began the process of blending in once again. Now fifteen years of age, John would come into the first of his Legacies at any time, and Henri was overly vigilant. Until John's powers fully developed, they would never be safe. John's first Legacy power announced itself on John's first day in his new school. His hands suddenly lit up, and he was unable to turn them off. He hid, and called Henri to come for him. Now, the training would begin. John's inheritance, contained in a Loric chest, would help him to learn to use the Legacies he receives, and hopefully give him the tools he needs to fight off the Mogadorians who roam the Earth in search of him and his two remaining Garde.

The final battle has John, Number Six and Henri facing Mogadorian Soldiers, Scouts, Beasts and Weasels. With the help of John's first love, Sarah, friends Sam and Mark, and a Chimera named Bernie Kosar, they manage to overpower the Mogadorian attack and escape once again, losing Henri to the battle. A fast paced story, I am Number Four is hard to put down, and leaves room for the sequel to follow.

More summaries and resources for teaching or studying I Am Number Four.

I Am Number Four from BookRags. (c)2022 BookRags, Inc. All rights reserved.