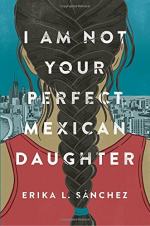 I Am Not Your Perfect Mexican Daughter Summary & Study Guide

Erika L. Sánchez
This Study Guide consists of approximately 80 pages of chapter summaries, quotes, character analysis, themes, and more - everything you need to sharpen your knowledge of I Am Not Your Perfect Mexican Daughter.

I Am Not Your Perfect Mexican Daughter Summary & Study Guide Description

I Am Not Your Perfect Mexican Daughter Summary & Study Guide includes comprehensive information and analysis to help you understand the book. This study guide contains the following sections:

This detailed literature summary also contains Quotes and a Free Quiz on I Am Not Your Perfect Mexican Daughter by Erika L. Sánchez.

The following version of this book was used to create this study guide: Sánchez, Erika L. I Am Not Your Perfect Mexican Daughter. New York, Alfred A. Knopf, 2017. HC.

Olga Reyes is hit by a truck, and at the funeral her younger sister Julia worries that their parents will never love her as they loved her sister. Amá decides Julia must have the quinceañera Olga never had. Julia finds sexy lingerie and a hotel key in her sister’s room, and though Amá locks it she decides to investigate. The hotel refuses to give out information about clients, so she contacts Olga’s best friend Angie, who tells her nothing.

Julia’s only close friend is Lorena, but Lorena makes a new friend, Juanga. Julia goes to a party with them and runs into Olga’s old classmate Jazmyn, who mentions that Olga had been in love. Olga’s community college also declines to release a student’s information, even posthumously. Julia wants to go to the school dance but clashes with Amá over revealing dress styles. Amá grounds her for coming home late and Julia feels she has no control over her life. In April, Juanga, and Lorena make fun of Julia’s sexual inexperience and she snaps at Lorena. English teacher Mr. Ingman suggests Julia should see a psychiatric professional, but she brushes him off. Later, Julia and Lorena apologize to each other and Lorena explains that while Juanga may be annoying sometimes, he needs support: he is openly gay and his father is violently homophobic.

Julia hates everything about her quinceañera, from her dress to the music. At the height of the ceremony, her parents hold a moment of silence for Olga. In the bathroom, she runs into her tía Milagros, who again mentions Olga. Julia confronts her aunt about her family’s disappointment and vents her frustration with insults. That night, Julia’s parents lament her disrespect. Amá explicitly accuses Julia of causing Olga’s death with her misbehavior.

At a used bookstore, a young man named Connor approaches Julia. They begin talking about books and wander together for hours. A few days later they go out for dinner and kiss. Connor’s white upper-middle-class background sometimes makes Julia uncomfortable about her own poverty, but she loves her time with him. When his parents are out of town, they have sex, which Julia enjoys despite its awkwardness and her internalized shame.

Julia finds the key to Olga’s room and extracts the laptop, lingerie, and hotel key. The next day, she finds Amá crying, having discovered them. Amá, disgusted, refuses to listen to Julia’s explanations. Julia’s only contact with Connor is now over a pay phone. When Connor expresses his need to see her, Julia claims he will never understand and she breaks up with him. Her depression intensifies.

Julia wakes up in a hospital bed, having slit her wrists. Psychologist Dr. Cooke encourages Julia to understand her frustrations, such as communication with her parents and her lack of independence. Julia sees Dr. Cooke weekly and attends an outpatient program for teens. Julia realizes that Olga had had a married lover.

Julia’s parents send her to Los Ojos, Mexico to recuperate with her maternal family, where their unconditional affection proves healing. Mamá Jacinta reveals that Amá had been a rebellious young woman, too, and that Apá had been a locally-celebrated artist. Julia’s tía Fermina divulges the long-held secret that Amá had been raped while crossing the border. Julia enjoys peaceful evenings with her family and starts a flirtation with the attractive Esteban. However, gang violence erupts again and Julia must leave.

Amá and Julia go out for dinner and have their most honest conversation yet, expressing mutual feelings of inadequacy. Amá tries to allow Julia more independence, and Julia attends a church prayer meeting with her. Julia also reconciles with Connor, who has been accepted into Cornell. Though she indicates her uncertainty about their future, Connor suggests they not overthink it.

Julia reads more of Olga’s emails and realizes she was pregnant when she died. She confronts Angie again, and Angie pushes Julia to keep the secret for her parents’ sake. Julia worries about the toll secrets are already taking on her mental health. She loiters by the medical office where Olga worked until she recognizes Dr. Castillo from Olga’s funeral. She corners him and he takes her to dinner, where he insists he loved Olga and always meant to divorce his wife. He give Julia her sister’s ultrasound, but Julia walks out on him.

Julia tries to connect with Apá about his artistic past but he rejects the conversation. Nevertheless, her mental health improves as she takes her medication, exercises regularly, and continues to see Dr. Cooke. Finally, she is accepted into NYU and DePaul with full ride scholarships to pursue her dream of being a writer. She and Connor spend more time together but Julia gets nostalgic about their coming separation. Lorena, too, worries that distance will affect their friendship, but she and Julia declare their affection.

At the airport, Apá’s blue shirt reminds Julia of the night of her self-harm. Apá had come home to find her bedroom door barred, and he had pounded frantically as she cut herself. Before she boards the plane, Julia gives him a drawing he had done of Amá when they were young and encourages him to start drawing again. On the plane, Julia reflects on the last two years and worries about the pressures of her new life. She looks at Olga’s ultrasound and marvels at all she has discovered about herself and her sister.

More summaries and resources for teaching or studying I Am Not Your Perfect Mexican Daughter.

I Am Not Your Perfect Mexican Daughter from BookRags. (c)2022 BookRags, Inc. All rights reserved.