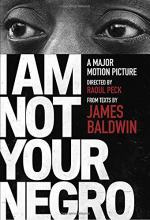 Summary
+Chapters Summary and Analysis
Introduction/Notes on the Writing Process
Ch. 1: Paying My Dues
Ch. 2: Heroes
Ch. 3: Witness
Ch. 4: Purity
Ch. 5: Selling the Negro
Ch. 6: I Am Not a Nigger
Important People
Objects/Places
Themes
Styles
Quotes
Topics for Discussion
Order our I Am Not Your Negro Study Guide

Related Topics
Another Country (novel)
Giovanni's Room
Going to Meet the Man
Go Tell It on the Mountain
Go Tell It on the Mountain (novel)
If Beale Street Could Talk
James Baldwin (writer)
Notes of a Native Son
One Day When I was Lost: A Scenario
Sonny's Blues
The Amen Corner
The Devil Finds Work
The Fire Next Time
The Rockpile
The Story of Roland

I Am Not Your Negro Summary & Study Guide

James Baldwin
This Study Guide consists of approximately 48 pages of chapter summaries, quotes, character analysis, themes, and more - everything you need to sharpen your knowledge of I Am Not Your Negro.

I Am Not Your Negro Summary & Study Guide Description

I Am Not Your Negro Summary & Study Guide includes comprehensive information and analysis to help you understand the book. This study guide contains the following sections:

This detailed literature summary also contains Topics for Discussion on I Am Not Your Negro by James Baldwin.

Raoul Peck, the director of the film version of I Am Not Your Negro, introduces the companion book with the story of the film's genesis. A lifelong admirer of Baldwin and his work, Peck hoped to create a film which would pay homage to Baldwin, while also presenting him in a light he had not been seen before. With the help of Baldwin's younger sister, Gloria, who manages his estate and has kept his personal and literary papers well-preserved, Peck gained access to all manner of essays and letters by Baldwin. Crucially, Gloria also provided Peck with a copy of Remember This House, a manuscript which Baldwin had been working on before his death. In these pages, Baldwin intended to bear witness to the lives and legacies of Medgar Evers, Martin Luther King, Jr., and Malcolm X, all of whom were Baldwin's friends and who were famously murdered for their roles in the 1960s Civil Rights Movement. This manuscript, which dissects the underlying truths about racism in America, provides the framework for I Am Not Your Negro. Peck supplements Baldwin's claims with film and media clips, particularly during in discussing media representation and in tying the conflicts of the past with those of today.

According to the text, Baldwin's status as a Civil Rights Movement insider provided him with personal insights to enrich our existing historical understanding of these three men, and many others, such as Sammy Davis and Lorraine Hansberry. In the manuscript, Baldwin articulates his need to witness, write about, and spread widely the traumatic experience of being black in America, which he considers his duty as a Civil Rights activist and writer. He examines, in his writings, the perpetuation of white America's dominant narrative, in which the white man is the hero in film, television and other media. These are skillfully combined, through the directorial discretion of Raoul Peck, with images from the films which are referenced and which substantiate Baldwin's claims. Possibly the most lucid and uncompromising voice in the entire Civil Rights Movement, Baldwin here articulates the suffering of black people in the United States Through Peck's guidance in both the film and its companion book, the audience learn through Baldwin's words how much work there is yet to be done until racial equality is achieved in the United States.

More summaries and resources for teaching or studying I Am Not Your Negro.

I Am Not Your Negro from BookRags. (c)2022 BookRags, Inc. All rights reserved.