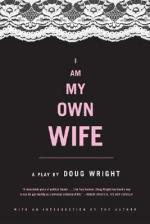 I Am My Own Wife Summary & Study Guide

I Am My Own Wife Summary & Study Guide Description

I Am My Own Wife Summary & Study Guide includes comprehensive information and analysis to help you understand the book. This study guide contains the following sections:

This detailed literature summary also contains Topics for Discussion and a Free Quiz on I Am My Own Wife by Doug Wright.

Doug Wright, successful playwright, is introduced to the idea of writing a play about a transvestite named Charlotte von Mahlsdorf. Charlotte, now in her sixties, survived as a transvestite during the Nazi regime and then during the rise and fall of communism. The play is a one-man show, so one person plays all forty characters. This lends an interesting perspective, as all characters, from Doug Wright himself down to a Stasi official, are acted out in the costume of Charlotte.

During the first act, Doug contacts Charlotte at the suggestion of his friend John, a reporter for U.S. News & World Report. After gaining permission from Charlotte to tell her story, Doug travels to Germany to meet her. What follows is a series of interviews and memories, interspersed throughout with Doug's own thoughts and observations. The audience sees Charlotte in the various stages of her life, from her youth to the present day. We are with Charlotte, in real time, as she is confronted by SS officers, as she kills her father and as she signs a deal with the Stasi to inform on her friends and family.

In the second act, more is revealed of Charlotte's involvement with the Stasi. The audience discovers that she was an informant for many years against her friends and family, which may explain how she was able to survive as a homosexual under the Communist Party. Her role as a gay hero is called into question, but she does not seem to feel any remorse for her involvement with the Stasi. She eventually moves to Sweden, but she returns seven years later to visit her museum in Berlin. While at the museum, she has a massive heart attack and dies. Her elusiveness about her Stasi involvement and her paradoxical life lead Doug to frustration about how to deal with Charlotte as both character and mentor.