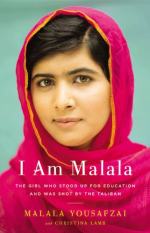 I Am Malala Summary & Study Guide

I Am Malala Summary & Study Guide includes comprehensive information and analysis to help you understand the book. This study guide contains the following sections:

This detailed literature summary also contains Topics for Discussion on I Am Malala by Malala Yousafzai.

I Am Malala: The Girl Who Stood Up For Education and Was Shot by the Taliban is an autobiography written by Malala Yousafzai, with the help of Christina Lamb, a five-time Foreign Correspondent of the Year. Malala begins her story as a young girl who lives in Pakistan in modern times. As a teenager, Malala becomes very outspoken about the rights of girls to have an education. Her willingness to stand up for this belief makes her a target for the Taliban, a religious group that has very different ideas about the roles of women in Pakistan society. One day, on the way home from school, Malala is shot in the head. The bullet doesn’t kill her but goes in near her eye. Because she leans at the moment the bullet enters her face, it travels down to her neck. She’s rushed to a hospital where the care is substandard. A foreign doctor happens to be in the country at the time and she takes over Malala’s treatment, later moving her to a British hospital for care and rehabilitation. While they remain in Pakistan, Malala’s parents and younger brothers are also at risk but it takes time before the paperwork is in order and the government allows her family to join her in Britain. They remain there, knowing they will be targeted if they return to Pakistan. They dream of returning to their home. The Taliban claims responsibility for the attack which left Malala in serious condition and two of her classmates injured. The man who says that he shot the girls is not captured or tried for the crime.

Malala describes a happy childhood that isn’t always filled with fear. She is the oldest of three children. Her father is a teacher who works hard to fulfill his dream of building a school. While some believe that girls of Pakistan should not be educated, there are many others who want the women to be educated. Most believe women should be allowed to do whatever they like, including filling professional roles such as doctors and teachers. However, there are societal dictates that greatly limit the options for females of the society. Women are not supposed to be alone when they are outside their homes. That means they have to have a male relative along when they are shopping in the local bazaar. Malala’s mother abides by the majority of the rules but she does the shopping and other errands for the family because Malala’s father is so often busy with his work in the schools.

The Taliban’s rise to power is gradual in the region where Malala’s family lives. There is an outspoken member of the Taliban who initially gains an impressive following and is given lots of money from the people. It’s only later, after he has amassed a great deal of money and a huge number of people obeying him that he becomes outspoken about his fanatical beliefs.

Malala’s father is also outspoken about his own beliefs. He thinks girls should be given the same educational opportunities as boys and that women should not be treated as if they are nothing more than property. He is warned that he might be targeted by the Taliban but refuses to be silenced. Malala’s mother is completely uneducated, unable to read or write. She hates that she is unable to help her husband, whose job it is to educate young people, and finds a tutor to begin lessons only to have them interrupted when Malala is shot.

I Am Malala from BookRags. (c)2021 BookRags, Inc. All rights reserved.