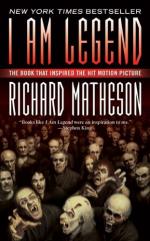 I Am Legend Summary & Study Guide

I Am Legend Summary & Study Guide includes comprehensive information and analysis to help you understand the book. This study guide contains the following sections:

This detailed literature summary also contains Topics for Discussion and a Free Quiz on I Am Legend by Richard Matheson.

In this novel, the protagonist, Robert Neville, is seemingly the only survivor of a plague that has converted the rest of humanity to vampires. Robert's mission is to destroy "the others" before they can infect him.

At the beginning of the novel, we learn of Robert's daily struggles to repel the vampires and repair the damage they do, to kill his attackers and dispose of their bodies, and to endure their nocturnal taunts, howling and rock throwing. He has boarded his house and hooked up a generator, and escapes through music, art, gallows humor, and occasional binge drinking. He has lost his wife and daughter to the dread disease that has converted the population to vampires, and his former friend and co-worker, Ben Cortman, taunts him daily.

We learn that he had fought in a war in Panama, a war which the U.S. won, but which brought in its wake dust storms, swarms of insects, and a plague which converted the entire population to vampires. Robert is immune to the disease as a result of the bite of a vampire bat which sickened him but did not kill him. One day, after a particularly vicious assault by swarms of vampires, Robert resolves to figure out how to defeat them, "or ditch the whole mess, life included." After his early experiments yield confusing results, Robert theorizes that some of the disease's effects are psychological, induced by a sort of mass hysteria gleaned from vampire legends. Robert learns how to use the microscope and is able to isolate the bacteria that causes the disease. The discovery is significant as it confirms that the belief in vampires is not based on superstition, but is a scientific fact.

One day, Robert befriends a stray dog who seems to have escaped the infection, and after finally gaining his trust and affection, the dog is infected by the vampires and dies. Two years later, Robert has once again settled into a pattern of day-to-day survival. He has killed off most of the vampires, but the survivors continue to harass him at night. Then he meets Ruth, a pretty young woman who has lost two children to the disease and her husband to a vampire killer. Robert is not sure he can trust her as she is repulsed by garlic, but says it is because she is weak from hunger and shock. She agrees to let Robert test her blood the next morning. Robert shares with her all he has learned about vampires, and they make love. Ruth allows Robert to draw her blood, but begs him not to look at it under the microscope. When he does, he sees that the germ has mutated. Ruth pounds his head with a mallet until he is unconscious and leaves him a note confessing that the mutant vampires have figured out a way to survive and sent her to spy on him and that it was Robert who killed her husband. She professes to love him, and urges him to flee while he still can.

Seven months later, Robert witnesses trained killers from the new vampire society brutally execute six vampires and then riddle Ben Cortman with bullets as he tries to crawl to safety. Next, they smash into Robert's house. He was prepared to surrender peacefully, but now he believes they are out to kill him, so he shoots them. Robert is seriously wounded in the crossfire, and is transported to a jail hospital. Ruth visits him and announces that the new society is taking back the world with violence. She says that the people hate and fear him for killing so many of them and want him dead. She tells him that he can't fight them, there are too many of them, and gives him a packet of pills to make the end easier. Robert Neville, the last of his kind, prepares to pass into the realm of legend, thus completing the cycle.

I Am Legend from BookRags. (c)2022 BookRags, Inc. All rights reserved.