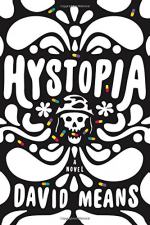 David Means
This Study Guide consists of approximately 52 pages of chapter summaries, quotes, character analysis, themes, and more - everything you need to sharpen your knowledge of Hystopia.

This detailed literature summary also contains Quotes and a Free Quiz on Hystopia: A Novel by David Means.

The following version of this book was used to create this study guide: Means, David. Hystopia. Picador, 2016.

The novel is preceded by a fictional editor’s note. In it, the editor explains that the following text is the work of Eugene Allen, a young Vietnam War veteran who killed himself after he had finished this manuscript. It is a work of alternative history that imagines President John F. Kennedy survived his first assassination attempt to serve three consecutive terms until he was ultimately shot. He has also invented a Michigan-based agency called the Psych Corps that has developed a PTSD treatment for returning veterans called enfolding. During enfolding, veterans are given a pill called Tripizoid and made to reenact their trauma, a process that erases all memory of it. Afterwards, only “immersion in cold water” and “fantastic, beautiful, orgasmic sex” can bring the memories back (20).

Rake had kidnapped Meg from the Psych Corps center after she was enfolded. As she rode beside him in his car, she felt drugged and had difficulty remembering much of her past. Rake rambled on about violent acts he had committed in the past until they stopped at a hotel. When a pair of police showed up in the night, Rake shot them point blank. They continued driving to Indiana until they reached a farmhouse, where Rake shot an entire family of strangers and robbed them of money and food. Meg passed out from the combination trauma, exhaustion and the drugs, and when she woke she in a cot bed in an old house. A burly man named Hank was sitting nearby, and when he saw her fear, he explained that Rake had left her with him and his mother MomMom. He had once been a violent buddy of Rake’s, but he had enfolded himself using black-market Tripizoid. Rake did not yet know this, and would kill him if he found out, so Hank was faking his old violent personality. He took Meg out into the forest for a hike, and the fresh air and pine scent made her feel awake and confident.

Back in Detroit, an enfolded veteran turned Psych Corps agent named Singleton was assigned to Meg’s kidnapping case. His supervisor Klein explained that the suspect Rake was a failed enfold whose trauma was actually doubled by a flaw in the process. Through their meeting Singleton daydreamed about his girlfriend Wendy, a fellow Psych Corps agent. Their affair was against protocol, so they could only liaison in secret. A few days later they met at the beach, where they smoked a joint and had sex. To Singleton’s shock, he unfolded a memory of Rake’s face, meaning he must have known him in Vietnam. Later Wendy and Singleton went to visit her father in Flint. He was a World War Two veteran who was too old to have his trauma enfolded, and his traumatic story made Singleton feel awkward about his lack of memories. He also met the Zomboid, Wendy’s ex-boyfriend. He had lost his legs in Vietnam, which also excluded his from enfolding, and he had a haunted look.

When Meg and Hank returned from their Hike, Rake was back with a skinny kid named Haze. When Rake got upset that Hank had taken Meg out without his permission, he through a pan of grease at Haze’s eyes. That night, he fed Meg some of the new pills he had gotten. She was unsure if he assaulted her while she was unconscious. Weeks passed until Rake went on another drug run. Seizing the chance, Hank took Meg to a nearby lake to try to unfold some of her old memories. When she dunked under water, Meg heard the voice of Billy-T. They had fallen in love while he was on leave from Vietnam, but during his second tour he will killed in action. After this vision, Meg felt stronger than she had before. That night around the fire, she explained to Hank that she believed Rake had taken her because he had been a war buddy of Billy-T’s. Hank thought he might be able to use this to help them get rid of Rake. But as more time passed, Meg grew frustrated that Hank hadn’t taken action against Rake. Hank explained that he was worried murdering him would cause him to unfold into his old violent self.

As the summer passed, Wendy and Singleton slowly realized that they were working the same case. One day, a man who claimed to be an old Vietnam comrade approached Singleton and gave him a bag of blue pills. Not much later, Kennedy was assassinated, and filled with a strange sorrow, Singleton and Wendy decided to take the mysterious pills. When they kicked in they had sex, and Singleton unfolded even more memories of war friends. After a Corps meeting the next day, Wendy approached Singleton and told him she suspected that riots would soon be happening across the Detroit area. They went to pick up her father, but he gallantly refused to leave so that he could help defend the Zomboid. Though it meant they would be officially AWOL, Wendy and Singleton drove north to a Psych Corps safe house. When they arrived, they found six bloody bodies hanging by their feet from the ceiling. A fellow Corps agent named Merle appeared and explained that he had been torturing rogue failed enfolds for information. Disgusted, Singleton nonetheless asked for anything he had heard about Rake. Merle told him that he was last known to be drug running with a man named Hank near Grand Marais. Wendy and Singleton headed toward Grand Marais. They arrived at Hank’s house at night, barging into the kitchen with guns drawn.

To Wendy and Singleton’s surprise, Hank, MomMom, and Meg all reacted calmly to their arrival. They all sat down in the living room and smoked a joint together, and in the days that followed they began to build trust. Eventually Hank decided to tell Singleton about Billy-T during a hike by the lake. He had convinced a drugged Haze to insult Rake’s fallen friend, then persuaded Rake to settle their score in a duel. He had loaded Rake’s gun with blanks so that Haze was sure to kill him. Afterward, they had burned Rake’s body and sent Haze away. When Singleton heard Billy-T’s name, he instinctually threw himself in the lake, and the cold water triggered the realization that he had been in a unit with Billy-T, Hank, and Rake. They had been brought back together as if by some strange magnetic force. When they came back from the lake, they found MomMom dead in the yard. They buried her and began packing to leave for somewhere safer. Their story would become the stuff of rumor and legend in the years to come.

The novel is followed up by an author’s note written by the fictional Eugene Allen. There are also interviews with his family and friends, in which they explain that Allen’s real life sister Meg was institutionalized following the death of Billy-T, and she was later kidnaped and murdered by a man named John Burns who strongly resembled Rake. After a selection several of Allen’s suicide notes, the section ends with a poem called “Prayer for Pop” (336). It imagines Iggy Pop as the new Christ, and it is full of sensual, violent imagery.

More summaries and resources for teaching or studying Hystopia: A Novel.