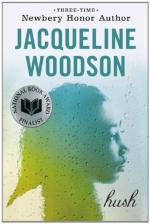 When Officer Jonathan Green witnesses two white cops shoot down an unarmed black boy, he changes his family's lives when he decides to testify against his colleagues. After the trial, his wife and two daughters are relocated to an East Coast city where they have to start making new lives. They also grieve the loss of the old lives they knew in Denver. Toswiah, his younger daughter, is the narrator. The story that she tells, follows her journey with her older sister and their parents from despair and loss through trials, new experiences, and discoveries, until they find the new things and the new futures that will make life make sense to them again. Each in their way, Toswiah and her family members all discover that they are still themselves—and also that they have become something new, at the same time.

"All that you have is your soul," Toswiah hears a pop song say. Her soul, it seems to her, is her life in Denver, where she loves the landscape and her best friend Lulu. She is a confident girl of 13, and she fits right into a society that makes perfect sense to her. Her father is a cop, friendly cops are everywhere in her and her sister's lives. When the family is pulled out of that life, with almost no warning, it makes a crisis for each of them. Toswiah has to give up the landscape she loves, and her friend and her grandmother, whom she loves. Her older sister Cameron has to give up her social life as well, and she also loses her boyfriend, who actually betrays her by spreading rumors about her father (it turns out that his father is one of the cops who shot the unarmed black boy). Toswiah and Cameron's mother seems to fare best, as she discovers religion on the day of the move, and becomes active with thee Jehovah's Witnesses, spreading the good news of religion. Toswiah and Cameron's father fares worst, spending most of his days sitting in a chair in front of the window, depressed and brooding over the case that changed his life so drastically.

Things get better over time for each of the characters. Toswiah takes the new name of Evie, and finds friends among her new schoolmates. She joins the track team, and gets a new nickname, Spider woman, for her long legs and her ability to run as if her life depends on it. Cameron finds new friends as well, and focuses herself on studying so that she can get into Simon's Rock college in Massachusetts. Starting this new life all by herself gives her something to aim for, to make the unhappy life she is living in the present less unhappy. Their mother gets her teaching license and finds a job teaching, which is the thing she is best at. Their father suffers the most, but even he turns things around. His depression gets so deep that he slices his arm, trying to kill himself, but he survives, and in the hospital, he learns to look at things from a new perspective, and not to take things so seriously. He rediscovers his life and his old self, and the book ends with Toswiah/Evie asking him what it was that drew him to police work. This bond between father and daughter is strengthened by both the recent past they have endured, and by the search for a vocation.